0.1 stars for this utterly unnecessary waste of perfectly good celluloid. 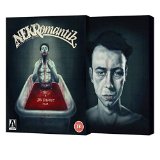 Nekromantik is written and directed by cult German director, Jorg Buttgereit (The Death King, Schramm: Into The Mind Of A Serial Killer), who clearly specializes in this kind of “made only for the purpose of shocking” trash. As ill conceived concepts go, this film makes The Human Centipede look like a great idea for a story-line. 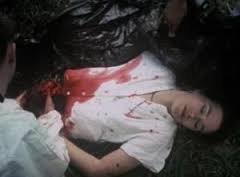 Nekromantik is based around the story of Rob Schmadtke (Daktari Lorenz – Hot Love, Horror Heaven), a severely disturbed individual who has somehow, presumably through lack of screening procedures, managed to join a crack team of men in white plastic suits (A.K.A. Joe’s Street Cleaning Agency) who somewhat implausibly clear away dead bodies which are littering up the countryside, with the full consent of the police and no regard whatsoever for any form of forensic investigation.

As a side line, he likes to collect body parts to take home for himself and his wife (Beatrice M. – Wings Of Desire) to enjoy. There’s apparently nothing more relaxing than enjoying a literal blood bath of an evening.

Eventually of course, he decides that his adoring wife is deserving of better, so he brings her a full decomposing corpse, which he fits with a phallic metal pipe and a condom (just to be safe) with which they proceed to pleasure themselves. If you must watch this, ensure that you have plenty of eye bleach at the ready.

There are plenty of overly graphic scenes of dismemberment of both humans and animals, alive and dead and Jorg Buttgereit takes great pains to ensure that nothing is ever left to the imagination, which is actually quite insulting really, as he is heavily implying that he is far more intelligent than you. Which is obviously not true, most people would have been intelligent enough not to make this film. 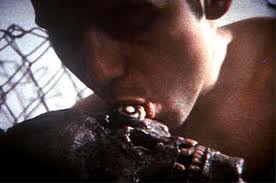 Now don’t get me wrong, I’m not squeamish, I’m not bothered by fictional blood and guts and I love a good horror film, but this just isn’t a good horror film. There’s no suspense, no real story-line, just image after image that you wish you hadn’t seen and that make you feel slightly sick.

There are plenty of special features included, some of which were made specifically for this release, and hats off to you if you have the stomach for them after watching the film, I know I didn’t. 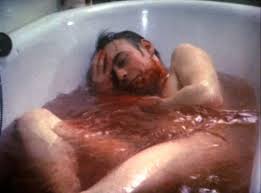 I am sure that there are people out there who would enjoy this, there are only 3000 copies being made, so hopefully that should be more than enough to cover it. If you do happen to be one of those people, good luck with that and I hope we never have the misfortune to meet.

Don’t be fooled by the 0.1 of a star, that’s not because it has any redeeming features, it’s because this close to Christmas I thought that awarding it a turkey would be insulting to the festive table

If someone buys you this for Christmas, may I suggest that you kiss them under the mistletoe and then quietly call the police.

Nekromantic is available to buy now on DVD and Blu-ray