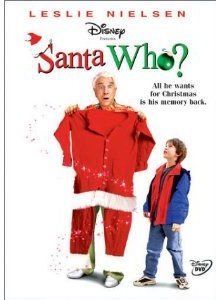 Santa Who? is a lovely film and I have given it 3.5 stars.

This is a family film through and through, and captures the spirit of Christmas admirably (yes, there were tears). The film is directed by William Dear (Bigfoot and the Hendersons) and was first released in 2000.

Santa Who? stars the fantastic Lesley Nielsen (Forbidden Planet, The Naked Gun) in the role of Santa Claus and he is very good at it, in fact we think that he might actually be Santa Claus! Also starring are Steven Eckholdt (Message in a Bottle), Robyn Lively (Savannah, Teen Witch) and Max Morrow (Ararat, The Christmas Shoes).

The acting isn’t brilliant (except for Lesley Nielsen), and neither is the script really, but it’s okay for what it is, a fun, colourful Christmas tale for a family to sit down and watch together in front of the fire, while putting the presents under the tree.

There are no special features included with Santa Who? but hey, who cares? It’s Christmas! Thoroughly recommended as an excellent way to get everyone in the mood for the festive season.

Santa Who? is available to buy now on DVD