4 stars for this stylish and genuinely disturbing horror/thriller. 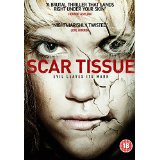 Scar Tissue is a British film, written and directed by Scott Michell (The Innocent Sleep)and produced by Sterling Pictures.

The film opens in an underground hideout, a room full of mutilated children, one crazed serial killer and a S.W.A.T team. After pumping the serial killer Edward Jansen (Pete Lee-Wilson – Blade II, Seven Seconds) full of bullets, we skip decades ahead, to a young man out for a night out to celebrate his birthday with his friends.

Luke Denham (Danny Horn – Doctor Who, Vera) is a reluctant visitor to the strip club, he would prefer to sit quietly by the canal, his favourite spot, but to keep his friend Matthew (Daniel Fraser – Lab Rats) happy he goes along with it. 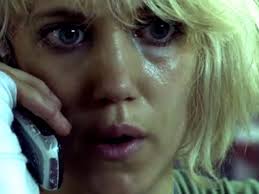 It doesn’t seem like such a good idea the next morning however, when he awakens to find the dead body of his best friend Caz (Arlissa Ruppert) in his bathroom  and a video on his phone showing a blonde woman entering a diner, along with a message saying “find the woman, find the truth”.

He does find the woman, and it turns out to be Detective Sam Cross (Charity Wakefield – The Raven, Mockingbird Lane), a police officer who has been suspended for being unstable. She recognizes the little girl in the video on his phone as being her sister, the last victim of Edward Jansen.

When the forensic results come in and the DNA found on Caz’s body is proved to be that of Edward Jansen, even though he’s been dead for decades, they realize that they have a serious problem, they are being stalked by a long dead serial killer and they don’t know why.

The two of them must go on the run and solve the puzzle before it is too late, both for them and other possible victims.

Scar Tissue is a really well written story with plenty of twists and turns and a very surprising ending which is highly satisfying. The acting is also very good, with a stand out performance from Imogen Bain (Angus, Thongs and Perfect Snogging) as the foul mouthed but hilarious pathologist.

With an atmospheric original score by Mark Ayres (Doctor Who) there is no shortage of tension to be had here and if it’s gore you are after then you won’t be disappointed either.

“What kind of man kills a child? Inflicts terrible pain and suffering on the most innocent and helpless of victims. I am that kind of man.”