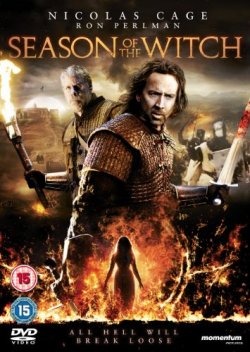 Season of the Witch is a highly entertaining, action packed film, well worthy of a 4 star rating. It is the latest offering from director Dominic Sena, who brought us Swordfish and Gone on Sixty Seconds. Although this is a very different type of feature (a period supernatural thriller), it does carry the trademark excitement and suspense that we have come to expect from Sena.

The film is set during the time of the crusades, and feels both dark and somehow claustrophobic, set as it is in a time of religious fervour and witch-hunting. The settings and locations are spectacular as well, capturing the feel of the era beautifully.

The script is well written and the story is fast-paced and thrilling, with sufficient surprises to keep you on your toes and features a stellar cast, including Nicholas Cage (National Treasure, The Rock), Ron Perlman (Name of the Rose, Hellboy) Claire Foy (The Promise) and Christopher Lee.

As you would expect from such a line-up the performances are all excellent, Nicholas Cage and Ron Perlman make an impressive double act as the knights who returned ‘early’ from the crusades and are charged with delivering a witch to a monastery for trial. They seem to strike just the right balance of action and comedy with this one, and it is their interaction which makes the film. Claire Foy is also very convincing as the witch.

Also included on the disc is a behind the scenes “Making Of” Featurette.

In summary, Season of the Witch is a thoroughly enjoyable film, well worth a watch (or several!) and is highly recommended.

Season of the Witch is available to buy on DVD