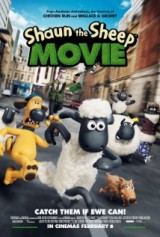 Shaun the Sheep The Movie. is in the Cinemas and this is why you should go and see it. From the Aardman productions team (Chicken Run, Wallace and Gromit, Wrong Trouser, A Grand Day out and Close Shave).

With our favourite little bleeter having a day off which as usual all goes wrong and finds the flock stranded in the Big City. Can the flock intellect save the day, with thrills and spills and close shaves can Shaun and the others make it back to the safety of the farm?

From StudioCanal and Aardman Animations comes the great new film and here are teasers.

Follow the link for a slide show of 12 funny GIFS from the film and here is some amazing trivia from the making of the film.

There are 21 Shaun puppets in total. It takes a week and a half to make a Shaun puppet from scratch.

The puppets need constant maintenance. It takes 45 minutes to re-fleece one sheep.

Over 80m of fleece fabric was used to fleece the flock. The fleece has to be stiffened with a spray of diluted PVA glue, to stop it ‘boiling’ under the studio lights and moving around when the animator touches it

Number of mouth pieces used was 3000

A full crew of 17 animators worked on the Shaun the Sheep Movie, producing an average of 2 seconds of animation per day.

The film is comprised of 25 sequences, which range in length from one minute to five-and-a-half minutes each.

There were 58 cameras, shooting across 33 units.

1,051 of the shots had visual effects on them, ranging from tiny clean-ups to major CG shots.

If there was 1 animator making the whole film, how long would it have taken to shoot? Each animator on average shot 2 seconds of footage per day, as a starting point so 9 years (or 8.936 years to be more precise)

The edit department got through 8 catering-size tubs of kids sweets during production.

Shaun The Sheep The Movie Trivia:Number of baas in the movie: 1589

Blue Peter badge (from the iconic BBC children’s show) appears on Shaun’s satchel. This has appeared in other Aardman productions including The Pirates

We pay homage to other movies throughout the film. For example in the animal containment scene we feature a cat whose behaviour is inspired by Hannibal Lector

Shaun the Sheep episodes are on TV in over 170 countries

Shaun the Sheep has won 2 BAFTAs