1 star for this misguided attempt at a children’s film. 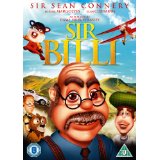 This film is the first Scottish full length animated feature film, and it shows.

The animation is very strange, dated looking for sure, but almost as if they have tried way too hard. Everyone and everything looks shiny, like it’s wet and there are white lines around all the objects in the foreground, making them look badly superimposed over the backgrounds (these are pretty good however). 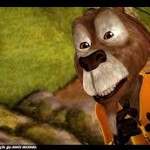 The main theme is that there is a Beaver Catcher attempting to capture Bessie Boo the beaver, who escaped into the highlands when the truck she was in crashed.

Bessie Boo is taken in by a family of rabbits, who all also wear clothes and talk and are into, of all things, pod racing.

It is up to Sir Billi and Gordon to save the day and with the help of the most mismatched group of characters you have ever seen, rescue the beaver before it can be caught. The film also stars Miriam Margolyes (Harry Potter, Romeo + Juliet) and Ruby Wax (Count Duckula, Popetown).

There are ducks flying aircraft, submarines and skate-boarding geriatrics and rather than being entertaining, the overall effect is just slightly baffling/stupid. Difficult to imagine even kids enjoying this one. It’s one redeeming feature would be the soundtrack, by Dame Shirley Bassey, but why she would want to be involved is anybody’s guess.

Sir Billi also appears to be a thinly veiled political statement, Sir Sean Connery makes no secret of his political affiliations even, it seems, when making children’s films. This is almost militantly Scottish, with aggressive branding and flag waving at every turn, and is not, in my opinion, remotely suitable viewing for children.

I have given it a star because I am amazed they managed to get so many well respected people to put their names to this production and because despite all it’s other problems, it is at least short.