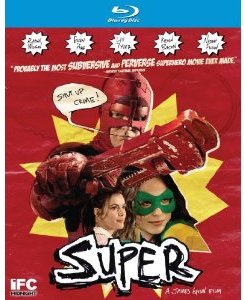 Where to start? This film has to be worth 4 stars of anyone’s money.

Super is an 18 certificate superhero film, and certainly thoroughly deserves that rating. Although it is in some respects a comedy, it is also extremely twisted and disturbing in places. It leaves you feeling slightly soiled, maybe slightly guilty for laughing and every now and again downright uncomfortable.

Super is written and directed by James Gunn (Slither) and features brilliant performances from Rainn Wilson (Sahara), Liv Tyler (The Lord of the Rings), Kevin Bacon (Mystic River) and Ellen Page (Inception). Rainn Wilson is quite magnificent as The Crimson Bolt (maybe a little too good in places!) and the strange but fascinating storyline is held up very well by this amazing cast, who add delightfully to the sense of moral dilemma that you feel while watching Super.

The film asks some very interesting and pertinent questions about vigilantism and whether or not normal everyday people know (or care) where the line should be drawn and whether you would cross it regardless. It seems to be as much as anything else an interesting study of human nature and certainly it has been a while since any film has caused so much debate after watching.

Included on the disc are; Behind the Scenes, Theatrical Trailer.

All in all, Super is not one for the faint hearted, but if you have a robust sense of humour then it is ideal for an entertaining night in – Shut Up, Crime!

Super is available on Blu-ray