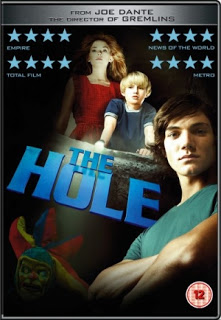 This is an excellent film, quite worthy of 4 stars. As a lover of horror films, I was at first a little put off by the fact that this is a 12 certificate – my normal instinct is to look for the 18 on the box, expecting this will make for a better film. However, having watched The Hole, I may be convinced to rethink this strategy.

Because it is designed for younger viewers, there is no blood and guts to be had in this feature, likewise no swearing, but this detracts nothing from a very well written storyline, and that is exactly what is offered here.

The premise of the story is simple, a mother moves to a small town, taking her two reluctant teenage sons with her. Soon after they move in, the boys Dane (Chris Massoglia) and Lucas (Nathan Gamble) discover a seemingly bottomless hole in the basement, and with the aid of their new next door neighbour Julie (Haley Bennet), they begin to investigate. This is where the fun starts, as all manner of deepest darkest fears begin to manifest themselves, leaving the teenagers to try and come to terms with and defeat their fears.

It is directed by Joe Dante (Gremlins, Small soldiers), although there are few parallels to be drawn between these films, but it will certainly appeal to those who have enjoyed his previous work.
The acting is excellent, especially from the young talent, and there are also two other notable appearances, from Teri Polo (The West Wing) as the mother, and Bruce Dern (Coming Home and Silent Running) as Creepy Carl.

The suspense is built up artfully, and there are moments which will give even adults cause to look under the bed.This film indisputably offers something for all the family. This is not a film that will bore parents while watching it with their kids and that in itself is a great plus point!

There are various special features included on the DVD; The Making Of The Hole, Interviews With Cast and Crew, and Behind the Scenes.

This is all in all an extremely enjoyable watch. The horror is in the old tradition of Doctor Who, so be warned, if you need to know you have a safe place to hide, you may wish to check behind your sofa before you start to watch!