3 stars for a well thought out thriller. 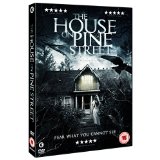 The House on Pine Street is written and directed by Aaron Keeling and Austin Keeling (I.Q.) and won Best Feature Film at both Kansas International Film Festival and New Orleans Horror Festival. 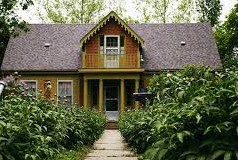 It tells us the story of Jennifer (Emily Goss – American Bred), seven months pregnant and having recently had a mental breakdown. In the interests of her safety and that of the baby, her husband Luke (Taylor Bottles – Trust Fund) has decided that they should move from their apartment in Chicago back to a large family home in her hometown in Dallas.

Jennifer is dead set against the move and we begin to see why when we meet her rude, overbearing and just plain nasty mother, Meredith (Cathy Barnett – Raising Jeffrey Dahmer). Almost as soon as they arrive she begins to organise them, even having the audacity the throw a housewarming party for them, without asking first, to which she invites all her own friends and then leaves them to clean up all the mess. 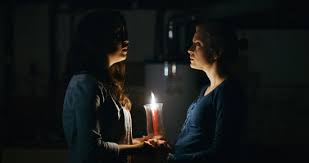 It is at this party that Jennifer first meets Walter (Jim Korinke), a chiropractor friend of her mother’s who also dabbles in the supernatural and who says that he can sense strange energies in the house.

She thinks nothing of it at the time, but then she begins to notice strange goings on. Doors refuse to stay closed, or slam unexpectedly. She is constantly hearing knocking sounds or footsteps even thought she is alone. Her husband doesn’t believe her, he thinks she’s having another breakdown and even when her best friend Lauren visits, she is unable to convince her. 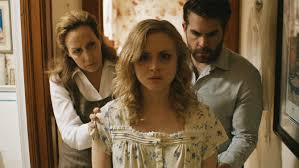 Starting to doubt her own sanity, she must now attempt to work out what is happening before it is too late for her, her marriage and the baby.

The House on Pine Street is a good watch, although it brings nothing really unique to the table the story is good, as is the acting. Emily Goss is particularly convincing and there are quite a few genuinely creepy moments. Very good use has been made of a limited budget, and a good score and creative lighting lend a brooding atmosphere. It is a little bit vague in places, whether this was deliberate I’m not sure, but all in all, a good film with an interesting twist and worth adding to your collection.

“Someone is laughing up there.” 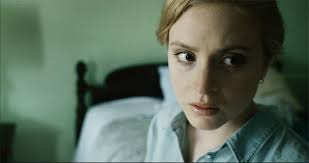 The House on Pine Street is available to buy now and will be released 01st Feb 2016.