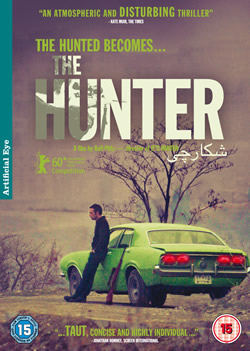 This is a strange one. I am giving The Hunter 2 stars, because although it is a good film, it is somewhat slow moving, and will certainly not be to everybody’s taste.

This is an Iranian film, subtitled in English, and the storyline is fascinating and very well written. It is in many ways reminiscent of Falling Down, but the overall feel of the film is quite different. It is directed by Rafi Pitts, who also stars, and must be commended for his excellent acting and directing. He plays the range of emotions experienced by his character beautifully, and with a degree of subtlety not often seen, even after the death of his wife and finally his daughter.

The Hunter is certainly a very interesting film, although it is obviously not aimed at a Western audience, and on several occasions I got the feeling that there were cultural references being made which I simply didn’t understand. This did detract slightly from the general enjoyment of the film.

This is definitely not one for anybody who is looking for an action film, as there are long periods of silence where the camera does the talking, although there is one pretty good car chase, after Raffi takes the law into his own hands and exacts revenge on the perpetrators of his wife and daughters killers; but on the whole The Hunter is very slow moving, and takes a long time to get started and to get to the point, which I’m still trying to fathom out the full message of the film.

Possibly the most annoying thing about the film is that just as you think it’s getting going, it finishes with no warning whatsoever, leaving you sitting there saying “What?!” It is essentially the journey of this story that is explored rather than the destination, and that is something I found quite odd.

All complaints aside however, this is a good film, with quality acting and a well written story and script and it is definitely worth a watch.