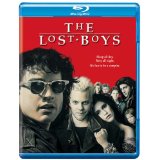 The Lost Boys is Road Rash Reviews pick from the Warner Bros catalogue for Halloween, a classic film, made long before all the vampires turned sparkly and is now available on glorious Blu-ray, looking better than ever. 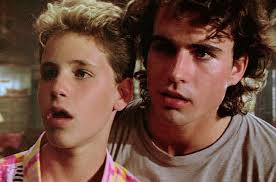 Although it is a typical looking town, there are rather a lot of missing persons posters dotted about the place, most especially the Boardwalk, where Sam and Michael take to hanging out, with it’s amusement arcades and big fairground rides.

It is here that Michael catches his first glimpse of the lovely Star (Jami Gertz – Twister), with whom he quickly becomes infatuated. However, this may prove to be a bad idea, given that she is a member of the local vampire gang, run by the scary David (Kiefer Sutherland – 24, Phone Booth), who are always on the lookout for new recruits. 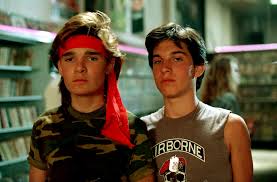 In the meantime, Sam has discovered the local comic store, where he meets the Frog Brothers, Edgar (Corey Feldman – The Goonies, Stand By Me) and Alan (Jamison Newlander – The Blob), who provide him with vampire comics from which to get handy survival tips.

Michael begins to act decidedly shady and both boys are concerned about their mother’s new boyfriend, Max (Ed Herrmann – The Good Wife, The Wolf of Wall Street), the owner of the local video store , who the boys firmly believe is the head vampire of the town. 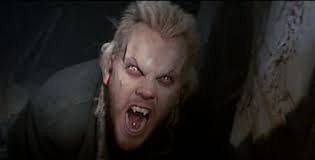 The Lost Boys is a fabulous film, just as much fun today as it was the day it was first released in 1987. It’s like the Eighties on a stick, it takes you straight back there, with some quite questionable hairstyles and fashion choices. It is, in essence, The Goonies with teeth.

It’s easy to forget though that The Lost Boys also contains some pretty good scary moments, the vampires are menacing, not all glittery like modern day ones and it is as much about the horror as it is about the comedy.

This is a classic horror film, which all fans of the genre should have in their collection!

“One thing about living in Santa Carla I never could stomach: all the damn vampires.”