2 stars for this enthusiastic but disappointing 80’s slasher flick. 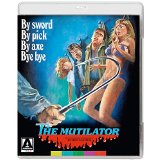 The Mutilator was originally released in 1985. It was written and directed by Buddy Cooper and was his only feature film, as can be said for almost everyone else involved in this production.

The premise of the story is pretty simple. Young Ed Jr. (Trace Cooper) has a birthday surprise for his Daddy, Big Ed (Jack Chatham – Rockin’ Road Trip). He wants to clean his guns for him, unfortunately one of them fires and instead he shoots his mother. 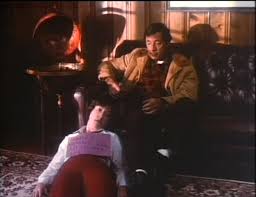 Unsurprisingly, Big Ed isn’t overly happy with his birthday gift of a dead wife and a certain degree of hostility is created between the two of them.

Skip quite a few years and Ed Jr. (Matt Mitler – Cracking Up, Basket Case 2) is now a teenager and away at college. When his father calls out of the blue to ask him to finish closing up his condo at the beach on a deserted island ready for winter, he sees this as a perfect opportunity for a four day beach holiday with his pals. 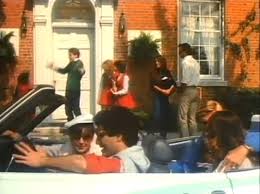 No-one has anything else planned so Mike (Morey Lampley) and Linda (Frances Raines), Ralph (Bill Hitchcock) and Sue (Connie Rogers) and Ed Jr. and his girlfriend Pam (Ruth Martinez) hop in the car and away they go.

Long story short, Daddy’s not happy, the battleaxe is missing and there is a shed out at the back full of pointy things. Being teenagers, they put two and two together and decide that the best course of action is to get drunk and then split up. Genius. 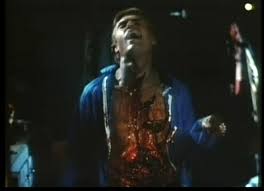 There is no disputing that the special effects in The Mutilator are excellent. The gore is plentiful and well detailed and even the severed heads look quite authentic. They were created by FX wizard Mark Shostrom (Videodrome, Evil Dead II), the only person to come out of this film with a glittering career.

The only problem is that they are so few and far between that they are thoroughly diluted by all the pointless character building and poor acting which joins them together. The way in which the “bad guy” suddenly develops superhuman abilities at the end is also something to look out for.

The soundtrack is pretty good, although the opening credits do seem a little silly, written as they were for the original title of the film “Fall Break” and simply left in after the name was changed.

All in all, this isn’t a bad film, but if this is the uncut version I certainly wouldn’t have been able to stay awake through the cut one. Fans of the genre will appreciate the conversion, but if you’re into something a bit more hardcore this might not be for you.

“Are you kidding? It’s like a graveyard around here. There’s some thunderstorms coming through. You could get struck by lightning walking on the beach at night.”

The Mutilator is available to buy now on Dual Format DVD and Blu-ray.