This is a fantastic film, well deserving of 5 stars. 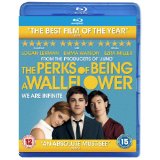 The Perks of Being a Wallflower is based on the critically acclaimed novel of the same name, written by Stephen Chbosky (Rent, Jericho). This excellent work of young adult literature has gained something of a cult status since its publication in 1999 and the film adaptation certainly does it justice.

This is probably largely due to the wise decision to have the author both write the screenplay and direct the film.

The Perks of Being a Wallflower is acted beautifully and very believably by its young cast, starring Logan Lerman (3:10 to Yuma, The Number 23) as Charlie, our “wallflower”, Ezra Miller (City Island, Afterschool) and Emma  Watson (Hermione Granger in The Harry Potter series, My Week with Marilyn). The film also features Johnny Simmons (Evan Almighty, Jennifer’s Body), Mae Whitman (Independence Day, One Fine Day) and Nina Dobrev (The Vampire Diaries).

The Perks of Being a Wallflower tells the story of Charlie, a troubled teenager entering his freshman year in a suburb of Pittsburgh in 1991, narrated by Charlie himself in the form of letters to an anonymous reader, whom Charlie has never met. Different from all the other students Charlie is largely shunned, until he meets Patrick (Ezra Miller) and Sam (Emma Watson), seniors who take him under their wing and begin to show him what life can be.

This is a coming of age film in the true sense of the word and captures very elegantly the joyful highs and gut-wrenching lows of becoming an adult. There is a delicate balance between the darker moments (of which there are quite a few) and the light hearted teenage antics, which makes the film feel very natural. You will probably be left with a burning need to make a mix tape and find your own “tunnel song”.

The Perks of Being a Wallflower is full of unexpected smiles and startling discoveries and is very intelligently written, making it an absolute must to add to your film collection, regardless of age, adults will enjoy this every bit as much as teenagers.

The Perks of Being a Wallflower is available to buy on Blu-ray and DVD from February 12, 2013