This is as fabulous as ever, 4.5 stars for both the film and for the 25th Anniversary extras and bonus features. 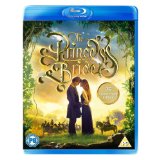 The Princess Bride is a classic fairy tale, originally released in 1987 and lovingly converted here to Blu-ray to celebrate the 25th anniversary of its birth. The re-mastered version is just brilliant, the film doesn’t even really look that dated (certainly not 25 years old), except of course for the mullets and the computer game screen shots!

Just in case there is anyone out there who hasn’t seen this film, it is packed with humour, true love, swashbuckling and high adventure, action packed and fun from start to finish.

The screenplay was written by William Goldman (Dreamcatcher, Misery), based upon his own novel of the same name. It was directed by Rob Reiner (This Is Spinal Tap, The Story of Us) and has a great cast, all of whom have gone onto successful careers. The film stars, among others, Cary Elwes (Saw, Robin Hood: Men In Tights), Mandy Patinkin (Homeland, Chicago Hope), Chris Sarandon (Fright Night, Child’s Play), Robin Wright (Beowulf, Unbreakable) and Billy Crystal (When Harry Met Sally, Analyze This).

In addition to the original Blu-ray release content, this special 25th Anniversary Edition has a number of new featurettes. One of the most interesting of these is True Love: The Princess Bride Phenomenon, which consists of two parts. The first part is a conversation filmed especially for this Blu-ray with Rob Reiner, Cary Elwes and Robin Wright. This is brilliant, it is clear how much they all still love it, even after all these years. The second part is called Entering The Zeitgeist and has interviews with the other cast members, plus fans relaying how The Princess Bride has influenced their lives. Also included is audio commentary from both Rob Reiner and William Goldman.

If you are a fan of this film, this edition is the real deal, offering a great version of this family favourite plus loads of extra bits and bobs.

The Princess Bride 25th Anniversary is available to buy now on Blu-ray.