2 stars for this fun but pretty rubbish horror beach romp. 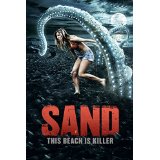 Written by Alex Greenfield (WWE Smackdown!, WWF Raw) and Ben Powell (Satanic, The Aggression Scale) and directed by Isaac Gabaeff (The Art of Storytelling), The Sand is one of the films curated by the FrightFest Presents team and is being released as one of the first phase of six films in time for Halloween.

The Sand starts out with a graduation party on the beach, all good fun, and with Vegas rules in play, i.e. no phones allowed, so that no-one need worry that any of their antics are going to find their way onto social media. Great idea, right? Wrong. 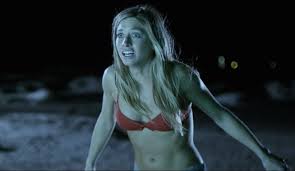 The party goes with a swing, lots of alcohol is consumed, very little clothing is worn and a giant alien gooey egg thing is discovered and left next to the campfire. All fine and dandy.

The problems begin the next morning. A groggy Mitch (Mitchel Musso – Hannah Montana, Monster House) and Kaylee (Brooke Butler – All Cheerleaders Die) wake up together in the beach house, cause for some consternation given that she has a boyfriend, Jonah (Dean Geyer – Terra Nova, Neighbours).

He seems okay though, he’s just woken up in the front seat of the car with Chanda (Meagan Holder – Jersey Boys). In the back seat are Vance (Hector David Jr. – East Los High) and Ronnie (Cynthia Murell – Jake Squared) and just across the way on the picnic table is Marsha (Nikki Leigh – The Wedding Ringer).

Completing the happy team is Gilbert (Cleo Berry – Mow Crew, The Zombie Apocalypse), a rather portly individual who has been thoughtful wedged upright into a waste bin with a phallus drawn on his face.

As they are about to discover, something has happened to the beach overnight. Everyone who slept on the sand is now missing without trace, and any naked flesh which comes into contact with it is eaten voraciously by a sea of tiny but efficient flesh eating tentacles.

What follows are their frenzied and sometimes a bit misguided attempts to traverse the treacherous few feet past the range of whatever is in the sand. You have never seen such excitement or hysteria over the subject of trying to get into a car boot. 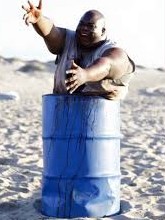 The Sand is enjoyable to watch, however it doesn’t boast a good or well written script, or any particularly stand out performances, it could have been a better film. It is a good concept, but as expected, they didn’t really know where to go with it in the end.

There are plenty of comedic moments though, the beach patrol guy (Jamie Kennedy – Scream, Three Kings) is hilarious and the gore is well done and quite gruesome in places, in spite of its 15 certificate.

It is fun and well worth an evening in front of the TV, but do be sure to put your shoes on, get your popcorn out and leave your brain at the door.

“This is embarrassing. I’m telling you, I’ve been in the beach patrol 23 years of my life. This is way worse than the lady with the horseshoe crab up her ass.”