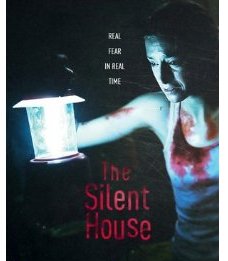 This film has some good ideas but doesn’t really work that well, so I have given it only 1 star.

The Silent House is a Uruguayan production, directed and written by Gustavo Hernandez and is quite bold in its concept, being filmed on a hand-held digital SLR in one continuous take. This is intended to increase the horror of the situation, however its overall effect seems to be to make the whole thing rather tedious (I think films tend to be edited for a reason).

The film stars Florencia Colucci (Laura), Gustavo Alonso (Wilson, Laura’s father) and Abel Tripaldi (Nestor) and follows them as they arrive at an old house in preparation to repair it ready for sale, and throughout the ensuing events. You do have to admire the acting, as it is almost the equivalent of stage acting, and a huge amount to learn. Although I didn’t enjoy this filming method, I can see that it must have been a logistical nightmare.

The storyline is pretty weak and although it purports to be based on a true story which allegedly happened in a village in Uruguay in the 40s, this seems unlikely as the story is full of holes, disjointed and somewhat confusing towards the end and you can’t help but feel that had it been based on a true story it might have made sense.

The audio is available in Spanish and German with subtitles in English and German and the only special features on the disc are Theatrical Trailers.

All in all this is not something that I would recommend for general viewing or for entertainment, however if you are interested in different filming techniques then this will definitely be for you.

The Silent House is available to buy on DVD