3 stars for this slightly underwhelming thriller. 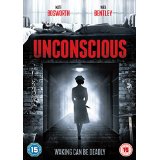 It is an interesting premise for a film. As it opens we see a family driving along a road. The man (Bentley) at the wheel is distracted by the young girl (Olivia Rose Keegan – Decoding Annie Parker, Salvation Street) asleep in the back of the car and veers off into traffic.

We hear a crash and the next scene we are in a house, where a woman (Bosworth) leans over his bed. Hooked up to all sorts of machines, the man remembers nothing, either of the accident, or of who he was before. 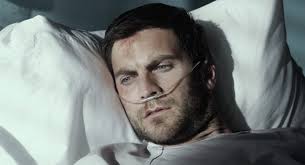 The woman reassures him that she is his wife and will look after him according to the doctor’s orders, but right from the start she comes across as being very suspicious and seems very reluctant to let the man explore what she claims is the house in which they live together.

He has cats he doesn’t remember owning and none of the photographs seem to show them together. As time passes he begins to have flashbacks from the aftermath of the crash, his daughter calling for him, although there is no child in the house. At the same time, the local police Detective (Shashawnee Hall – Bruce Almighty) has found the car, discovered that it hasn’t been registered since the 60s and commenced an investigation into the identities of the missing occupants.

As he regains his strength the man finds all sorts of strange items around the house. There is a room which is completely full of rolls of film hanging from the ceiling and a room in the basement with a projector continuously running, a worrying array of torture devices and most sinister of all, a dead body hidden in a cupboard.

The police are closing in, but with every fresh discovery it becomes apparent that his spouse, if that is indeed who she is, is incredibly dangerous and he will have his work cut out to survive until they arrive. 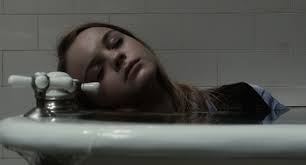 Although the script is well written and the acting performances are very good, somehow this film fails to ignite the imagination quite the way it should. There are plenty of twists, but although I hadn’t predicted them, they weren’t that much of a surprise either.

It is watchable and does build tension slightly, but it just isn’t as compelling as it might have been. Having said that, there is enough psychological horror and gore to keep the attention until the end and it is a pretty good story, so worth a watch.

“Do you understand how important family is? Strong families are the backbone of this society. There’s nothing more beautiful than the foundation of a husband and wife, raising their children in a proud home.”

Unconscious is available to buy now on download and DVD