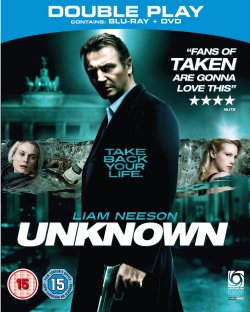 Unknown is a truly great action thriller, and I have given it 4.5 stars. This is the latest offering from Jaume Collet-Serra (Orphan, House of Wax), not a name I was familiar with, but certainly someone I will be keeping an eye on after this.

The storyline is intelligently written and has enough twists and turns to keep even the most cynical viewer entertained. On first inspection this would appear to be a “by the numbers” thriller, but this is far from being the case. Despite strenuous attempts to predict the story we were delightfully defeated on a number of points, excellent!

The film is graced by some magnificent performances from an all-star cast including Liam Neeson (Schindler’s List, Gangs of New York), Diane Kruger (Inglourious Basterds, National Treasure) and January Jones (Mad Men). The story is carried along at a fast pace, leaving you always one step behind and for a film which is almost 2 hours long, it certainly goes very quickly, no clock watching required for this one.

There are various special features available on the disc, Unknown: The story, Behind The Scenes, and several interviews with cast and crew.

Unknown is awesome, and comes highly recommended on just about every level, a fabulous way to spend a night in!

Unknown is available to buy from July 18 on DVD