3 stars for this bizarre and slightly surreal British thriller. 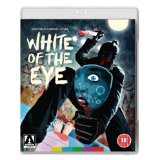 White Of The Eye was first released in 1987 and this release represents the Worldwide debut on Blu-ray and UK debut to DVD.

It is written and directed by Donald Cammell (Demon Seed, Wild Side) and tells the story of Paul White (David Keith – U-571, Behind Enemy Lines) and his wife Joan (Cathy Moriarty – Casper, Analyze That), who live in the quiet town of Globe, Arizona. 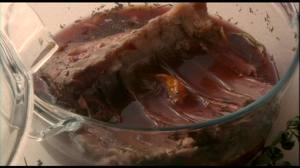 As the film opens, we see an eagle flying majestically over the landscape, until it gets to Tucson, where we see Goldwaters, a large department store being exited by what passed in the 80s for a posh housewife. As we follow her to her home we realize, to our horror, that someone is in the house! (We can tell this by the full screen eyeball watching us, and also by the bloke in gardening gloves putting a goldfish into the pot roast (I don’t know, your guess is as good as mine). 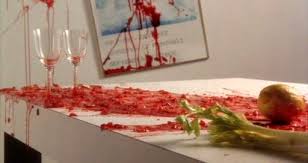 As she is brutally murdered, we cut to the first of this films sweeping vistas, accompanied by the sound of opera, as we fly along the road, across the Apache Mountains, past the copper mines and into the town, where Paul and Joan reside.

There is a serial killer on the loose and both the police, led by Mendoza (Art Evans – Die Hard 2, Metro) and Joan herself begin to suspect that her opera loving, hi-fi expert of a husband may know more than he is letting on.

So follows a desperate struggle for all involved to come out of this with their lives and their sanity intact. 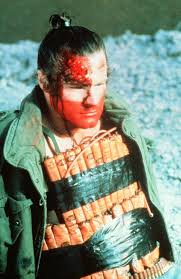 White Of The Eye is an interesting film, there’s no doubt about that, too slow moving to be exceptional, but still intriguing. It deals with Apache folklore and the difficulties of marriage and relationships, with ex boyfriends (Alan Rosenberg – Righteous Kill, Robots) and bits on the side, (Alberta Watson – The Lookout) all set against a strange and rather confusing backdrop.

A couple arrive at one point, to have their car stereo fixed by Paul and then just randomly appear every now and again with no explanation and no seeming relevance to the story at hand. Very odd.

I suppose that it’s main problem is that it’s just SO eighties. There are mullets and shoulder-pads everywhere and that is quite hard to get past in 2014. It feels as though they tried to define an entire decade using just one film. Who knows, maybe they did.

The restoration is taken directly from the original negatives and the result is excellent, good clear picture and a creepy soundtrack by Pink Floyd drummer, Nick Mason. There are also plenty of special features for interested parties.

Good film this and worth a watch, but do be prepared for a bit of head scratching (and probably laughing at the outfits).

White Of The Eye is available to buy now on Dual Format DVD and Blu-ray and Steelbook.