Eureka Entertainment made their biggest ever announcement today through their social media channels as they revealed details about recent acquisitions and their home-video plans for the forthcoming months.

New acquisitions announced include Tobias Nölle’s Aloys and Kiyoshi Kurosawa’s Creepy which were both picked up at this year’s Berlinale, along with festival favourite, Naomi Kawase’s An (Sweet Bean) and Alex Ross Perry’s Queen of Earth.

·         FIPRESCI Panorama prize winner at this year’s Berlinale, Aloys, is Tobias Nölle’s beautifully shot story of Aloys Adorn, a private investigator who receives a call from a mystery woman who he proceeds to have a “telephone walking” relationship with. Sharing adventures, parties and heartbreak together, Aloys and his new-found companion, travel through a multitude of emotions and scenarios.

·         Past and present collide in Kiyoshi Kurosawa’s Creepy when retired detective Takura takes on a six-year-old case of a missing family. When he moves with his family to a new neighbourhood; things start to get “creepy”. Kiyoshi Kurosawa’s latest film sees him return to his film making roots revisiting his early psychological styles. The master is back to that early genre defining style with all his signature tactics intact!

·         Festival darling Naomi Kawase’s latest picture An (Sweet Bean) has been screened in almost every important festival over the last year, including entry into the prestigious Un Certain Regard category at Cannes and a spot at the London Film Festival. The owner of a street food stall finds himself confronted with an odd but sympathetic elderly lady looking for work. One taste of her home-made bean jelly convinces him, starting a relationship that is about much more than just street food.

·         Alex Ross Perry’s Queen of Earth is a thrilling examination of a deeply complex relationship between two miserable women.  Catherine, played by Elisabeth Moss is going through a bad patch. Her childhood friend, Virginia (Katherine Waterston) takes her to the country house of her parents, nestled at the edge of a lake. The place seems ideal to relax, but Catherine is deteriorating and will soon take a disturbing turn.  Eureka released Alex Ross Perry’s previous film Listen Up Philip in 2015.

New additions to the Masters of Cinema Series will feature Robert Altman’s That Cold Day in the Park, A Buster Keaton Blu-ray Box Set, Billy Wilder’s Fedora, an F.W. Murnau Blu-Ray Box Set and Robert Aldrich’s Flight of the Phoenix. Whilst other releases are to include 80s sci-fi adventure Enemy Mine, More 4’s TV Drama Resistance and last but not least a 30th Anniversary Special Edition Blu-ray of Ron Howard’s Cocoon.

·         Just prior to his career breakthrough M*A*S*H*, director Robert Altman made That Cold Day in the Park, a memorably unsettling psychological thriller, which originally premiered at the Cannes Film Festival. Available from 20 June 2016, in a Masters of Cinema Dual-Format edition.

·         Buster Keaton: The Complete Short Films 1917-1923, a 4-Disc Blu-ray Box, containing thirty-two films – with a running time of over 740 minutes – this collection documents Buster Keaton’s short films between 1917-1923 and captures Keaton’s first steps in front of a camera. This box set charts his early association with ex-Keystone Kop Roscoe ‘Fatty’ Arbuckle through to starring in, headlining, and directing his own box office smash hits. Available as part of the Masters of Cinema Series from 18 July 2016

·         One of Billy Wilder’s most poignant films, Fedora, tells the tale of an American producer (William Holden) who tries to lure the reclusive actress Fedora (Marthe Keller) out of retirement. Full of melancholy and sadness Fedora is as impressive today as when it was first released. Available in a Masters of Cinema Dual-Format (Blu-ray & DVD) edition from 8 August 2016.

·         One of the most revered directors of early cinema, the legendary F. W. Murnau created many masterpieces that are still unrivalled today in their beauty, mystery and horror. During his pre-Hollywood career he made his most influential features. Presented for the first time in the world in high-definition are five of these masterpieces, F.W. Murnau: Five Films (Schloß Vogelöd, Phantom, Der Letzte Mann, The Grand Duke’s Finances, Tartuffe) will be released in a Special Masters of Cinema Edition Three-disc Blu-ray box set on 22 August 2016.

·         Robert Aldrich’s Oscar nominated film, Flight of the Phoenix, follows the plight of the survivors of a plane crash fighting to repair the wreckage into a machine of flight. Starring Richard Attenborough and James Stewart, this classic adventure is beautifully realised and wonderfully acted, and will be released in a Special Masters of Cinema Blu-ray edition on 12 September 2016.

·         Ron Howard’s Cocoon won two Academy Awards when released twenty years ago and is still as charming now as it ever was. When visitors from outer space arrive on earth for a rescue mission to retrieve a secret that has laid here for a thousand years, they share a wondrous adventure of love and friendship with a group of senior citizens. A 30th Anniversary Special Edition Blu-ray of the film will be released on 18 July 2016 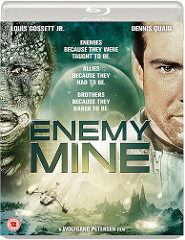 From director Wolfgang Petersen (Troy, The Never Ending Story) comes Enemy Mine, a tale of two enemies thrown together in a hostile world where to survive they must become allies.  Starring Dennis Quaid and Louis Gosset Jr. this sci-fi adventure is a tale of an unexpected friendship and newly found respect. Eureka Classics present the film in high-definition for the first time in the UK in a special edition Blu-ray, released on 20 June 2016

·         And finally, shown on More4 last year, Resistance is set in Paris, 1940, and is based upon true events. Through interconnecting stories we see the lives of six young people fighting for freedom from Nazi occupation who will join forces to produce a newspaper, and their lives will be transformed. Released on DVD on 12 September 2016

Managing Director Ruth Brukarz-Schofield stated “At Eureka Entertainment we are really excited about our line-up for the year ahead. Our core brand Masters of Cinema is moving from strength to strength and our release schedule over the coming months is certainly one not to be missed. We look forward to continuing to support new and groundbreaking directors with a diverse range of releases as we move into a new era.

These titles are a select few of what to look out for in the coming months, with plenty more scheduled.