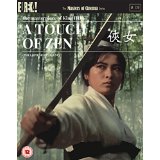 Eureka have taken an extremely influential film in its genre and given it the 4K restoration as well as the original score, also a bonus disk of interviews and a documentary and a booklet.

After his success with his films Come Drink with Me and Legend of the Mountain, King Hu is let loose on this epic tale of political intrigue and the consequences of trying to tell the truth. 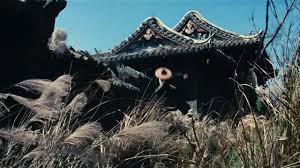 The film  opens with the beautiful sounds and mountain vistas of Taiwan as it sweeps over the rural landscapes and through the long grasses up to the derelict Fort Jinglu, which is reportedly haunted. This is how Gu Shengzhai (Shih Jun, Raining in the Mountains) and his mother live on the site rent free. Gu is an artist and painter with a

small shop in the local village. After opening up one morning a stranger shows up at his shop asking questions about the local residents. He reveals he is Ouyang Nian (Tien Peng) and would like Gu to paint his portrait which Gu happily agrees to, but it will take a couple of days to complete, this is what the stranger wants. At the end of the day Gu heads home where his mother has

been entertaining the local blind fortune-teller Mr Shi (Pai Ying, Dragon Inn). His mother is chastising him for being in his thirties and for having no aspirations to better himself or carry on the family line.

On his way home Gu keeps hearing ringing and banging noises coming from the old Fort. He ignores them until they start up again after he finishes his supper. He investigates the Fort with the aid of a lantern but finds nothing apart from

old traps much to his embarrassment. The following morning he is still curious so he heads back over to the Fort but to his surprise his Mother comes out the door followed by a young woman who is introduced as Yang (Hsu Feng, The Valiant Ones). Gu is smitten straight away even though Yang wants nothing to do with him, but his Mother thinks that they would be a great match.

It is only when Ouyang has a go at the blind fortune-teller do we find out that things are afoot at the Fort. What are the identities of these newcomers and what secrets do they hide?

With those in power being corrupt it is hard for people to clear their names and live a peaceful life. This is a brilliant film in its

telling of a great story with beautiful backdrops and awesome martial arts fighting, with leaping and bounding and plenty of acrobatics. You should grab yourself a big bag of popcorn and enjoy 3hrs of pure mastery of Hu’s genre.