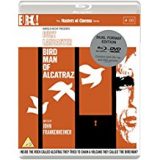 Eureka (Masters of Cinema) bring us the best prison film ever in the guise of the fictionalised life of Robert Stroud (Burt Lancaster, The Train, From Here to Eternity, Gunfight at the O.K. Corral, Run Silent Run Deep) from the book of the same name. This 1962 film adaptation by new film director John Frankenheimer (The Manchurian Candidate, The Train, Grand Prix, French Connection II, Ronin) who is about to have a very long directorial career (40 years). This is the prison film that all others are judged against.

After a short introduction by Thomas E. Gaddis (Edmond O’Brien) the author of the Birdman of Alcatraz we are whisked back to 1912 and a train is travelling to Kansas, it is full of prisoners bound for Leavenworth Prison. The stove on board is roaring away and the prisoners are having trouble

breathing and one Robert Stroud is not happy with this situation, so he covers his manacled hands with his cap and smashes one of the windows, letting in some well appreciated fresh air, well by the prisoners anyway.

(Karl Malden, Cat o’ Nine Tails, On the Waterfront) who explains that Stroud killed a man in 1909 and will spend the next nine years with him and he will learn all 93 rules that must be adhered too and for the window, 30 days without privileges. Stroud displays his disdain for the judicial system and their rules.

Once inside his cell his cell-mate picks up a photo of his mother which riles Stroud, you dont rile a man who is sharpening a shiv.

This argument spills out into the laundry room where another inmate tells Stroud off for having a go at his cell-mate and he also mentions Stroud’s mother and again this produces Stroud’s darker side and he tries to kill the prisoner. Which gets them both 30 days solitary confinement, which Stroud takes in his stride. This confirms Stroud’s outlook on his life. 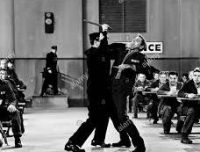 Alaska to visit him, but it was Saturday and there are no visits on a Saturday. She says she will visit later in the week, but this isn’t good enough for Stroud and he grabs Mr Kramers (Crahan Denton, The Parent Trap) lapel which gets Stroud on a caution which means no visiting rights. Stroud appeals to Kramer to no avail and Kramer goes to use his truncheon and Stroud uses his shiv killing the guard immediately.

confinement until his hanging in 30 days time. This seems barbaric to his mother Elizabeth (Thelma Ritter, Rear Window, Pillow Talk) who vows to get the hanging commuted so she pleads to the presidents wife. She is successful and the hanging is cancelled,

but Harvey has the last laugh as he tells Stroud that he will spend the rest of his life in solitary confinement with no contact at all with the rest of the prisoners at any time.

This fuels his hatred of the system and he just exists until he find a stranded baby bird during a storm whilst taking his exercise. Thus starting a hobby that will change the face of ornithology for ever.

Lancaster is superb in this Oscar nominated film (Best Actor in a Leading Role (Burt Lancaster), Best Actor in a Supporting Role (Telly Savalas,Battle of the Bulge, The Dirty Dozen), Best Actress in a Supporting Role (Thelma Ritter) and Best Cinematography, Black-and-White.) and now it is on Blu-ray this makes the perfect package for the Burt Lancaster fan.

1080p presentation of the film on Blu-ray, with a progressive encode on the DVD.
LPCM mono soundtrack (Uncompressed on the Blu-ray)
Optional English subtitles for the deaf and hard-of-hearing
Audio commentary with film historian and editor Paul Seydor, moderated by Twilight Time’s Julie Kirgo and Nick Redman
Illusion of Freedom: Richard H. Kline on John Frankenheimer s Birdman of Alcatraz (29 mins) a new video piece on the film
An exclusive new video interview with film historian Sheldon Hall
Original theatrical trailer
A collector s booklet featuring new writing on the film by Travis Crawford, as well as a selection of archival imagery from the film s production

“I give you my word, my son is a person of worth.” 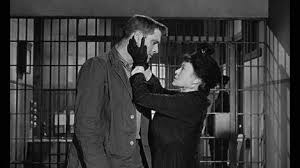 Birdman of Alcatraz is available on Dual-Format.