3 Stars of Women Yakuza VS the Men.

This film (the first time to appear on a home entertainment system) is a little confused, billed as a yakuza/ ghost story, but doesn’t really live up to either genre, but if you’re into 70’s films of this type you will be quite happy.

Akemi Tachibanais, (Meiko Kaji, Lady Snowblood: Blizzard from the Netherworld) the heir to the Tachibana gang of the Eastern Provinces and her dragon tattooed cohorts turn up to assassinate Boss Goda, (Bumon Kahara, The Flame of Devotion) in order for her to take her rightful position.

As she wields the death blow, Goda’s little sister

tries to step in and save him but she is blinded by Akemi’s blade.

She is shocked when a black cat appears and starts to lap up the blood from the girls wound. It then promptly jumps at her, starting her to believe she has been cursed.

Which keeps her having nightmares whilst she spends time in jail, where she formally introduces herself to the other female inmates who after three years swear their loyalty by having the body of a dragon tattooed on their backs, (Akemi being the head).

But whilst being incarcerated others have had their eyes on the Tachibana’s territory and they will stoop to deceptive lows to achieve their goals. Not everybody is loyal to the person they call “Boss”. Things soon start to go wrong for Akemi and her loyal subjects, those that have waited for her and those that served time with her as they all come together.

Mr Tani steps in when a gang turns up at the market and starts to cause a ruckus. But his honour is offended when Akemi offers to pay for his services. He leaves but Akemi keeps an affectionate eye on his movements, (a good man).

Soon her men are dying and the gang members want to exact revenge but she stays their swords and takes a measured approach and then things step up a gear as her tattooed sisters are found dead with their tattoos removed and the mysterious black cat re-appears licking the blooded skin.

Who is the mysterious blind woman who shows up at Boss Dobashi’s, (Toru Abe, Tokyo Story) Opium den? She may be blind but she knows where everything and everyone is and she is a formidable opponent but you can tell she has an alternative reason for being with Dobashi.

This is a good film now presented all cleaned up with fights, deception, weird cats on a wire and plenty of claret.

But really one for the die hard fans of this genre. 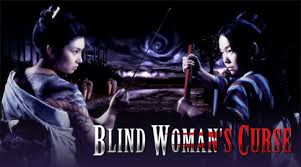