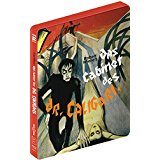 Das Cabinet des Dr. Caligari is a German silent film, first released in 1920. It was written by Carl Mayer (The Last Laugh) and Hans Janowitz (Der Januskopf) and directed by Robert Weine (The Night of the Rose). 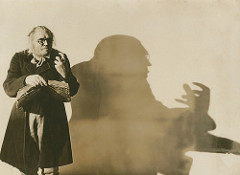 It is now presented as part of the Masters of Cinema Series, #92. Bringing this highly influential film up to standard was a massive undertaking, with film stock needing to be sourced from various locations and some scenes needing to be replaced, but the end result is well worth all the work. This limited edition steelbook 4K restoration really brings it back to life.

The story is being told by a young man, Francis (Friedrich Feher – The Robber Symphony) who tells of the nightmare experiences of himself and his fiance Jane (Lil Dagover – Destiny, Final Accord). 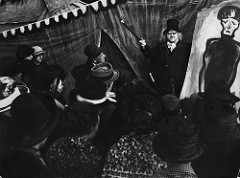 Das Cabinet des Dr. Caligari is set in the small town of Holstenwall. A strange man turns up at the local clerk’s office and requests permission to present his spectacle at the local fair. He is Dr. Caligari (Werner Krauss – Secrets of a Soul, Waxworks) and his act turns out to be a cabinet containing a somnambulist. 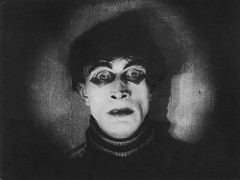 Named Cesare (Conrad Veidt – Casablanca, The Thief of Bagdad), he has slept for his entire life, but can be awakened for a few moments during the show by Dr. Caligari to answer questions from the crowds and tell the future. When Francis and his friend Alan (Hans Heinrich von Twardowski – Hangmen Also Die) ask Cesare how long Alan will live they are met with the reply “until just before dawn”. 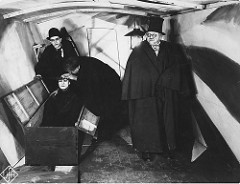 Thinking no more of it they head off home, but sure enough that night Alan is murdered in his sleep. Convinced that Caligari is somehow responsible, Francis sets about trying to prove it, but will anyone believe him?

Das Cabinet des Dr. Caligari is a quite magnificent film and it is brilliant that it has been saved for future generations to enjoy. With it’s twisted landscapes, Expressionist style and dark psychological themes it was truly groundbreaking upon it’s release and still stands up to modern viewing. The soundtrack is glorious and very atmospheric and the acting is of course way over the top, as it needs to be for a silent film.

It also features the two hour long 2014 documentary From Caligari to Hitler, which explores the social and cultural impact of German Cinema during the Weimar Republic, plus lots of other special features including a 44 page booklet. This is well worth owning if you are a serious horror buff.