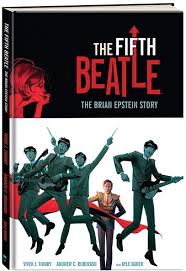 machine that is the Beatles.

The Fifth Beatle is a graphic novel from the well known and respected Dark Horse Comics, written by Vivek J. Tiwary (Greenday’s American Idiot, The Addams Family) and beautifully illustrated by Andrew C. Robinson (Dusty Star) and Kyle Baker (Why I hate Saturn, Plastic Man), who is responsible for a special section in the middle of the book, paying homage to the Beatles comics of the 1960s.

As a fan of the Beatles, if you said to me “the fifth Beatle” my mind would automatically go to George Martin, their record producer, as I think would most peoples. So it was rather a surprise to discover that this is in fact the Brian Epstein story.

And a tragic and fascinating tale it is. As he explains in his afterword, Vivek J. Tiwary has devoted a good portion of his career to researching and uncovering the truth behind this flawed hero, responsible for the Beatles meteoric rise to fame. 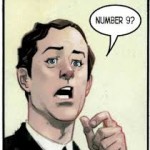 Despite the crucial role he played in the success of what was arguably the biggest group in the world, Brian Epstein has always remained an enigmatic figure, hiding in the shadows, about whom little is really known.

All that is about to change however, hopefully the world is now ready to listen.

The story begins on a misty night in Liverpool, a young homosexual makes advances toward a sailor in a back alley behind a club called The Cavern, as a new band called The Beatles perform in the background.

The young man, Brian Epstein ran the family business, a record store, where he was working when one of his staff (the mysterious Moxie) insisted he should go to see the Beatles perform.

He liked what he heard, he signed them up and proceeded to try and help them to make it at enormous personal cost. He changed their image, pounded the streets until he found them a record contract (with George Martin at Parlophone records) and eventually managed to get them the famous Ed Sullivan appearances which secured their success in America.

But alongside all the public attention, Brian Epstein was fighting a private 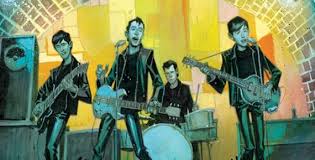 battle, popping pills to reduce his anxiety and extreme exhaustion and fighting against and hiding his homosexuality in a country where such practices were illegal (and would remain so until the year of his death).

Although he died in 1967, at the age of 32, his legacy remains as strong today as it was the day he died, and will hopefully live on for many more years.

This is a great read, for people who are not into the Beatles, this will be an interesting insight. And for Beatles fans there are lots of sneaky little Beatles gags hidden within the script and the drawings to keep us happy. 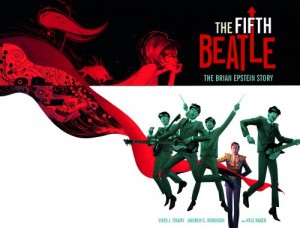 The Fifth Beatle graphic novel is available to buy now.