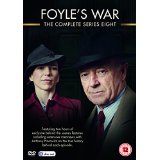 Foyle (Michael Kitchen, My Week With Marilyn) is now attached to MI5 in 1946. Season 8 brings three 89 minute episodes that keep you gripped from start to finish. With over 2 hrs of special features, this three disk set is well worth adding to your collection as writer/creator Anthony Horowitz carries on these excellent stories based on events of the time.

The three films are High Castle, Trespass (directed by Stuart Orme) and Elise (directed by Andy Hay), all set 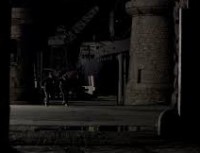 in 1946, but our first film starts in Southampton docks in 1942. Two young ne’er do wells are trying to sneak onto a ship as they have a tip-off that the ship is carrying kegs of whisky and as this is all rationed, how can they resist some free whiskey? However, one of them is suddenly taken ill after drinking some and they have to flee with guards chasing after them.

In 1946 the world is up for dividing by the UK, the USA and Russia but these plans were started by individuals long before the war ended. Foyle and MI5 are brought into a murder case as a University Professor/interpreter is found dead in a London park. That isn’t the problem, the problem is who he knew and where he had been working. Samantha (Honeysuckle Weeks, My Brother Tom) still drives Foyle around and still manages to get into trouble and she is keeping a secret from Foyle as she tries to keep the peace at home. Who was in bed with the Nazi’s?

Trespass: takes it’s inspiration from the bombing of the King David Hotel in 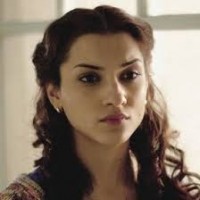 Jerusalem. The Fisher family are about to sit down for supper when the British army burst in and forcibly remove the father, citing him as one of the terrorists. This scars their daughter Lea (Amber Rose Revah, Agora), while in London Adam (Daniel Weyman, Millions) is trying to keep his constituents happy by finding housing and keeping the black-market out of his West Peckham. Daniel Woolf (Alexander Arnold, The Salvation) is the son of Sir David Woolf (Jonathan Tafler, The Infidel),

a wealthy ship owner who transports Jewish people to the new country. But Adam’s problem is Charles Lucas (Richard Lintern, Page Eight) who wants to gain political prowess. His views are explosive and he agrees with apartheid and anti-Semitic notions. He whips up the locals into an anti Jew riot as the police look the other way. As usual Sam and Foyle are embroiled within the story when Woolf ignores all the warnings against him and Lea turns up in London and joins family friends with intentions on the upcoming Summit. 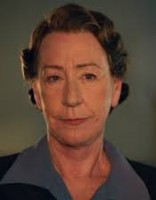 part of SOE (Special Operations Executive). With that amount of cloak and dagger stuff, something is going to come back and bite you and it does, as a young man follows Hilda to the steps of MI5 and asks her if she remembers him. When she say that she doesn’t he pulls out a revolver and shoots her, telling her that it was for “Elise”. She lays in a hospital fighting for her life and Foyle must go back through the murky past of the SOE and the fact that nine agents died in a short period of time, leading to the belief of the mystery double-agent called “PLATO”.

At the same time, a London racketeer is buying golf clubs (not 9 irons), entertaining Russian agents and running massive black-market deals and as usual it takes Foyle to bring it all together, as agents seem to be everywhere and a string links them all together.

As usual Foyle’s stoic demeanour carries him through the tangled web of post-war intrigue as everybody fights to carve up the world for its riches, be it oil, gold, diamonds or resources, with fingers in many pies and hands in others pockets only MI5’s best will do even if they don’t trust him