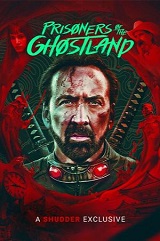 Prisoners of the Ghostland is an American horror/Western film written by Aaron Hendry (Beerfest) and Reza Sixo Safai (The Persian Connection) and directed by maverick Japanese director Sion Sono (Love Exposure, Suicide Club). It is his first (almost entirely) English language film. It is a Shudder exclusive, available to stream on Shudder from 19th November 2021. 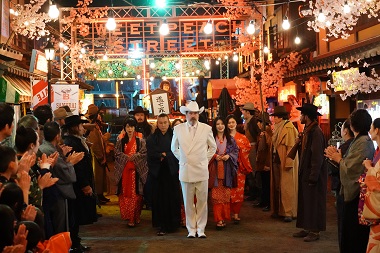 Prisoners of the Ghostland is set in a part of Japan where there has been an ecological disaster, the land has become contaminated with nuclear waste and large areas are uninhabitable. A town has grown up, Samurai Town, created by The Governor (Bill Moseley – 3 From Hell, To Your Last Death). A bizarre mixture of Japanese culture and the American Wild West, he has populated this town with his beautiful young adopted Granddaughters who he has “rescued”. 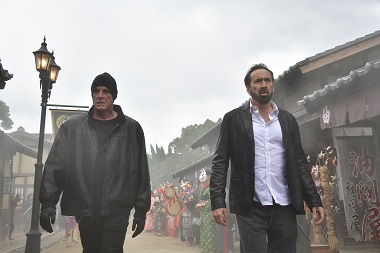 One night, three of these young women escape from Samurai Town, but become trapped in the Ghostland, the irradiated wilderness which lies beyond the gates. The Governor decides to call on the services of Hero (Nicholas Cage – Season of the Witch, Tokarev) a convicted criminal who was arrested following a botched bank heist with his partner Psycho (Nick Cassavetes – Face/Off). 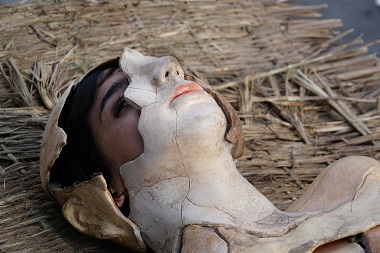 His task is to rescue Bernice (Sofia Boutella – Star Trek Beyond, Kingsman: The Secret Service), a favourite of the Governor.

In order to guarantee that his goods will arrive unsoiled, Hero is locked into a leather suit with strategically placed explosive charges which will explode upon inappropriate thoughts or actions. If he does not return within 5 days, all of the charges will detonate. Can he find her and get back in time to save himself? 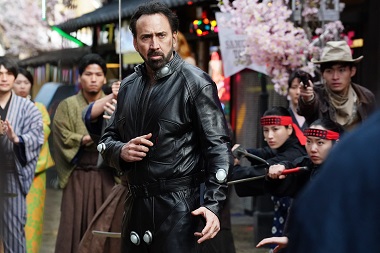 This is a very good idea for a film and there are certainly plenty of interesting elements in there. It’s a strange mix of genres, with some excellent martial arts fight sequences side by side with wild west style shoot outs.

The settings are outlandish, as are the characters and you certainly know that you’re in for a wild ride when Nicholas Cage is the least out there presence on the screen at any given moment. 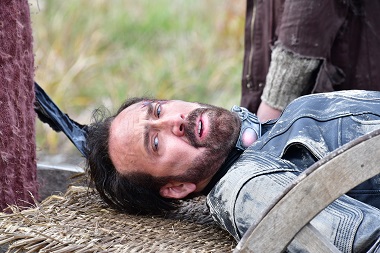 There are some repeated scenes which are visually stunning, most notably the exploding gumball machine and it’s a shame that while a lot of the film is quite remarkable, the end result is not. Because there’s so much going on it isn’t really brought together and the overall effect is quite tedious in places and feels over stylized.

There is however plenty of gore and action and a few interesting little twists and all in all, well worth a watch just for the experience.