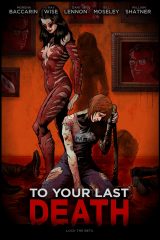 Till Death or Dismember.

First time writing a feature Jim Cirile and Tanya C. Klein bring us your worst recurring nightmare in this animated horror and employ seasoned television director Jason Axinn (SMBC Theater, Space Guys in Space) for this off the wall bloodfest. This is not a seasonal family reunion, but is a family coming together to iron out their issues in the most gory fashion. Coverage, Ink Films have hit on a cracking head-splitting idea for future scenarios with this multi-award winning animation. 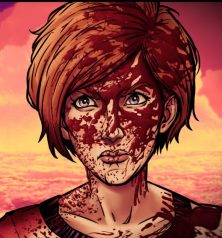 It’s not always about the destination but the journey taken to get there that is more interesting. So the story starts at the end where our protagonist, one Miriam DeKalb (Dani Lennon, Dracula: Reborn, The Love Witch) she looks like she has been through hell and has most of it on her clothes and skin. She is a young woman with a history of mental instability. With sirens wailing she staggers up the road, she is also being observed by a mysterious woman and a man. 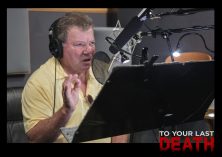 As the overseer (William Shatner, Star Trek – The Motion Picture, Star Trek II – The Wrath of Khan, T.J. Hooker) explains the start of the tale of Miriam we see the the graphic novel style of this movie. It has taken an international team to bring it all together and with the atmospheric music of Rene G. Boscio (Arrow, The Flash, Blindspot) we know which direction this film is going in, ‘Down the road to Hell’

The mysterious woman is the Gamemaster (Morena Baccarin, Deadpool, Deadpool 2, Stargate SG-1, Serenity) an outer-worldly leader of a gambling syndicate, that bets on the outcome of an event. Today they have picked the events surrounding the DeKalb family gathering that the father Cyrus DeKalb (Ray Wise, Batman: The Killing Joke, Star Trek: Captain Pike) has orchestrated.

Cyrus is the head of a company that profits from war and he has something important to tell his estranged offspring Collin DeKalb (Benjamin Siemon, Crazy Ex-Girlfriend), Kelsy DeKalb (Florence Hartigan, Entrance), Ethan DeKalb (Damien C. Haas, Unravelled) and of course  Miriam DeKalb. They all hate their father and for good reasons too, they pretty much all hate each other as well (so this should be fun once the doors are locked and the lifts turned off).

Their father has employed three mercenaries to help get his news across, Pavel (Bill Moseley, 3 from Hell, The Devil’s Rejects, House of 1000

Corpses), Jurek (Steve Geiger, An American in China) and Aengus O’Callaghan (Ruairí Douglas) and they do love their jobs.

“All outcomes are possible.”

Miriam finds the ordeal very harrowing and she sets about putting thing right, that is until the Gamemaster puts a spanner in the works and she finds that she has to do it all again and this time make it entertaining for her guests and if they don’t like it she can intervene at any time for any reason.

Coverage, Ink have hit on an unique style of horror with its graphic novel approach and hopefully it should lead to more instalments of the Gamemaster et al.

To Your Last Death will be available in 2020, watch this space.