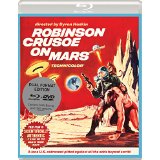 Based on a novel by Daniel Defoe (Moll Flanders) comes Robinson Crusoe on Mars, adapted for the silver-screen by Ib Melchoir, (Death Race 2000) and John Higgins, (Seven Cities of Gold) and directed by the man who steered a lot of your favourite Sci-Fi films and more, Byron Haskin (The War of the Worlds, Treasure Island, Captain Sinbad, From the Earth to the Moon). Now presented 1080p and comes with a 28 page booklet. The film with great effects long before CGI was even a dream, this film lead the way for Sci-Fi to come many years later. 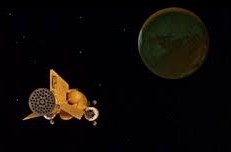 Mars Gravity Probe 1 has a two man, one female crew. Colonel Dan McReady (Adam West, Batman, Family Guy), Commander Christopher “Kit” Draper (Paul Mantee, Breakout) and Mona (The Woolly Monkey). They are heading to the red planet to study its gravity and to see what effect it will have

on Mona. But when heading for orbit the on-board radar picks up a massive meteor on a collision course with them and they have no

choice but to make evasive manoeuvres. This is a success in the short term as it puts them in a decaying orbit. The Commander fires the manoeuvring thruster at full to get them back into a normal orbit, but with no fuel they have no option but to eject and set up base on the surface of Mars.

With adieus said, they head for the fiery ground of the red planet, Kit heading off first. With not the best of landings Kit starts assessing his situation as some of his oxygen bottles have been rendered useless. Making a sled and grabbing supplies and technical equipment he heads away from the crash site to search out shelter, heat, water and most of all oxygen.

Whilst exploring he tries to warm himself on one of the flames that he keeps seeing but this turn out dangerous, which leads him to finds some small yellow rocks that burn gently in the Martian atmosphere.

about making camp and logging his progress. Finding the Martian atmosphere potentially fatal he has to devise a way to survive on this barren planet.

He still has many obstacles to overcome, however much training you have, especially when you try and find your shipmate and the outcome is not of the

good type. Now left to his own devices, he must overcome all the obstacles of being alone on a distant barren rock.

With his radar set up he hears his orbiting mother-craft circling, but when he discovers evidence of other-worldly existence he must take drastic action.

This is Robinson Crusoe, so you know the story.

Victor Lundin and Paul Mantee play marvellous roles, especially Mantee as he is on the screen on his own for most of the film talking to a monkey or himself as he passes the months all alone until, he thinks there is a rescue attempt. But no it is an unknown technically advanced race.

They blast the local area to bits. 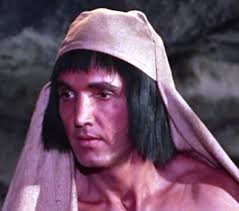 Without giving all away these aliens use a slave army of miners who they ruthlessly control and Kit and Friday come into contact with each other.

This will be my go to film this Christmas morning as I sup a hot cup of tea and settle back and enjoy truly well made Sci-Fi, that will have you coming back to it for decades.

A Must See and Own!