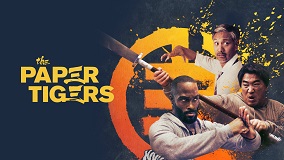 The Paper Tigers is written and directed by Quoc Bao Tran, a most impressive feature directorial debut. This warm hearted and earnest film is sure to delight everyone.

After opening the Fighting Spirit Film Festival on September 11th, The Paper Tigers will be released on Digital Platforms including Altitude Films from 20th Sept 2021.

“I swear I will always honour my Sifu. I will be loyal to my brothers and I will defend the weak. This I promise as a disciple, to the very day I die.” 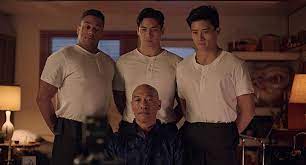 They swear their loyalty to Sifu Cheung and to each other, but when Danny is given the opportunity to head out to Japan to fight, the group split up and go their separate ways. 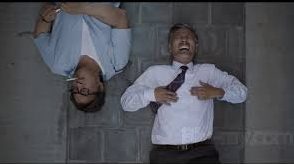 Now many years have passed and the three are middle aged men, each with their own problems. Danny (Alain Uy – Helstrom, The Morning Show), who works in insurance, is struggling to balance his job and his partial custody of his son Ed (Joziah Lagonoy – Neuroblast) much to the annoyance of his estranged wife Caryn (Jae Suh Park – Purity).

He has a visit from Hing (Ron Yuan – Mulan, The Accountant), now on disability following an accident at work. He has grave news, Sifu Cheung has died from a heart attack. 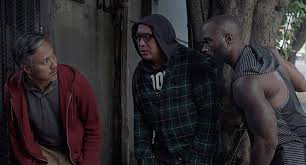 They attend his funeral and here they meet three young pretenders, Chief (Phillip Dang – Black Lightning), Boi (Brian Le – The Real Target) and Fu (Andy Le – Shang-Chi and the Legend of the Ten Rings). Suspecting something is amiss, they decide to bury the hatchet and contact Jim (Mykel Shannon Jenkins – The Gods), now a boxer and try to patch things up.

With a little help from Sifu Wong (Raymond Ma – Lethal Weapon 4) and the now grown up Carter (Matthew Page – Enter the Dojo) they must put aside their differences and find their inner Tigers once again to avenge their masters’ death.

“The fiercest tigers can never share the same mountain. Beimo.”

The Paper Tigers is a very enjoyable watch. It calls to mind the glory days of the eighties when we enjoyed films such as The Karate Kid.

The characters are likeable, relatable and extremely well acted and there are plenty of laugh out loud moments. However, this Kung Fu Dad film also contains some excellent fight scenes and will satisfy Martial Arts enthusiasts as well as those just seeking comedy.

Heart warming and action packed, it’s a delight to watch these aging Kung Fu heroes trying to rediscover their glory days without pulling a muscle in the process. An excellent and exciting debut and well worth adding to your collection.

“That was our teacher. We called him Sifu. You know what that means? Si means Master and Fu means Father.”

The Paper Tigers is available to stream on Digital Platforms from 20th September 2021.