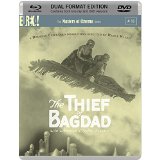 Thanks to Eureka, The Masters of Cinema Series #98 comes one of the greatest adventures.

From the prolific director (139 credits) Raoul Walsh (High Sierra, What Price Glory) comes the 1924 version of the classic tale of the wily thief of Bagdad who takes what he wants.

A film with monsters, flying carpets, flying horses, magic ropes, crystal balls, the magic apple and of course Douglas Fairbanks (Robin Hood, The Black Pirate) what more could you want in a Fantastical Journey?

Fairbanks plays Ahmed, a carefree jobbing thief around the glorious buildings (designed by William Cameron Menzies) and streets of Bagdad, taking peoples purses as they drink at the watering station or taking newly baked bread to feed himself as he watches the bustling city while it goes about its business.

As he gazes on he spies a magician who put a young boy in a big basket and does the sabres though the basket trick. This is not what impresses our thief, but the rope that shoots out of the box, vertical and rigid and the boy appearing at the top. A useful tool for a thief Ahmed thinks, so during prayer he steals the rope and makes his escape.

He heads back to his lair where his evil partner (Snitz Edwards, The Phantom of the Opera) is sleeping, revealing all that he has amassed during his day. But his associate is interested in bigger things. Treasure within the Caliph’s (Brandon Hurst, Dr. Jekyll and Mr. Hyde) palace. A palace guarded by large men with huge swords, tigers and a massive ape. But when you have a magic rope this problem is easily overcome with a bit of reconnaissance. 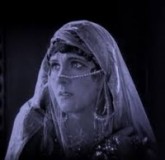 But whilst searching for the treasure he is distracted when he sees the Caliphs daughter Julanne Johnston, (Golden Dawn) asleep in her room. Captivated by her beauty he cannot resist investigating further. But while he is distracted by her and her slippers, (shrugs shoulders, each to their own) he is discovered by one of the princesses slave girls, a young Mongol woman, Anna May Wong (Daughter of the Orient)

Our thief makes his escape along with his beloved slipper.

Ahmed to be one of the contestants for the princesses hand in marriage and therefore the ruler of Bagdad. Amongst these men is the Mongol prince Sojin Kamiya (Seven Samurai), a dastardly man who wants Bagdad at all costs.

With spies in the city he plans to have the princess 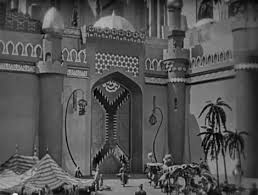 and all Bagdad’s wealth, but can true love win the day, as we see our hero and the others off on adventures to far flung places?

A great adventure for all the family as Fairbanks enjoys the role he produced in one of the times most lavish budget, that can be seen in the sets and the special effects of the era.

Available to order on Dual-Format Now. 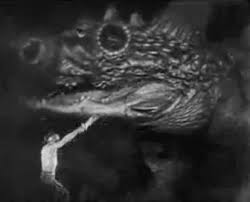