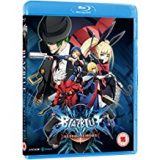 Hideki Tachibana (H2O: Footprints in the Sand) directs the anime version of the Playstation 3 video game BlazBlue: Calamity Trigger and BlazBlue: Continuum Shift from 2008 to 2010, telling the story of the renegade Ragna the Bloodedge, a rebel against the authorities.

Ragna the Bloodedge walks the walk he has done time and time again, he is at the Sheol Gate and he is here to face a Murakumo Unit, Nu-13. She appears and the two begin their sword fight on the brink of a huge furnace. As they fight a dark figure observes them, he is

Hazama, a powerful character and former head of the World Void Information Controlling Organization. The Controlling Organization’s purpose is to keep balance in the world by safeguarding and regulating sources of dangerous power. Ragna the Bloodedge tries to activate his Blue Grimoire that is attached to his artificial arm. Before this powerful weapon activates the Nu-13 pulls in close and impales the pair of them and they fall into the furnace.

Ragna walks along the roadside of Kagutsuchi and his Blue Grimoire feels strange with the energy in this area. Rachel suddenly appears with her familiars and after a small altercation with her familiars she claims that she is bored and that the wanted criminal that is Ragna should go to the city of Kagutsuchi. Ragna considers this and remembers that he has not yet destroyed the kiln in that city.

What ensues is sibling rivalry and the search for the criminal Rawrgnya. (Ragna) and with Hazama watching from the sidelines and a woman with an ability to wield the true Blue Grimoire. This is anime of a fighting game, and that says it all. One for the fans. 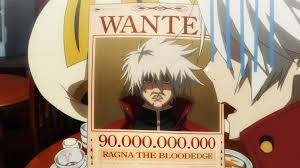