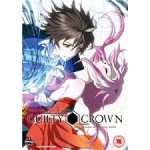 Guilty Crown is set in Japan, after the outbreak of the Lost Christmas virus in 2029 almost wiped out the population. Japan is now under the control of GHQ, a multinational military organisation, intent on hunting down and controlling any one who has the virus. 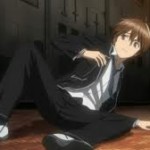 After an unfortunate series of events, Shu inadvertently receives the Void Genome she was carrying, intended for the leader of Funeral Parlor, Gui Tsutsugami (Micah Solusod – Appleseed XIII). This gives him the “Guilty Crown”, the power to draw and wield a unique weapon (the Void) from the hearts of others. 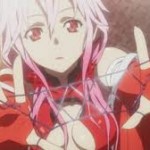 This new found ability, combined with Gui, who can see the Void present in a person’s heart and so knows which weapons can be drawn, becomes a vital tool for Funeral Parlor as they begin to launch a series of attacks on GHQ.

This is a great idea for a series and it works really well. The characters are well developed and the action sequences are nothing short of spectacular. Most of the fighting takes place using large remotely controlled mecha, known as Endlaves, which make for all sorts of excitement. 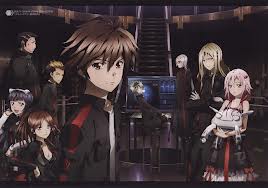 The animation style is lovely too, very detailed and elaborate, especially when the Voids are being used.

There seems to be a trend at the moment in anime towards series dealing with issues such as terrorism (e.g. Mawaru Penguindrum), displacement of society and loss of national identity and Guilty Crown fits neatly into both of those categories.

Guilty Crown truly is anime meets sci-fi how it should be done and I would thoroughly recommend adding this one to your collection. Roll on Part 2!