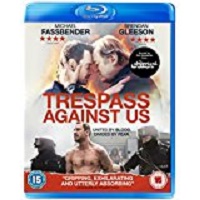 Genes VS the Mind

Trespass Against Us is Adam Smith‘s (Dr Who) first full length feature film and he begins with this gritty British film where family ties need to be broken for the seed to grow.

A hare running across a field, very natural thing you may think, but not when it 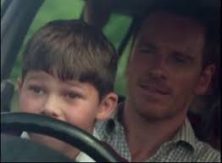 is being chased by a 4×4 with a young child driving the car. Tyson (Georgie Smith, Cider With Rosie) is sat on Chad’s (Michael Fassbender, Assassin’s Creed, The Light Between Oceans, X-Men: Days of Future Past) lap. They drift around the field in pursuit of their quarry.

the head of it is Colby (Brendan Gleeson, Edge of Tomorrow, Harry Potter and the Deathly Hallows: Part 1) with Chad being his heir apparent along with Tyson and his daughter Mini (Kacie Anderson).

Chad is uneducated but he knows a lot of survival skills in the modern world, like how to drive through housing estates at high speed and how to evade capture from the modern police force. But he

wants away from it all, the camp life the dodgy jobs his father sets up and he wants a quiet life with his wife Kelly (Lyndsey Marshal, The Forgotten) and the kids.

Other families follow Colby on the caravan camp and a

strange individual Gordon ‘Wurzel Gummage’ Bennett (Sean Harris, Prometheus) who is witless, but Colby likes all the creatures of god. This is where Colby and Chad differ, he wants his children educated at school so they have the opportunities he could never have and not live the life he and his imprisoned brother have lived under the tutelage of Colby.

the camp as Tyson tends to his dear dog, while Colby and Chad paint a stolen vehicle bright yellow and with words about his brother. There is a large bang, the extinguisher has exploded covering the surrounding in fire retardant but also killing Tyson’s dog. This is where Chad falls out with Wurzel but Colby stops him doing any damage.

Now we see Chad’s street skills as he gets the attention of the local police man P.C. Lovage (Rory Kinnear, Skyfall). They give chase, but Chad easily evades their efforts. 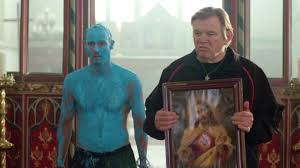 Later Chad goes to a large scrap yard to see Noah (Alan Williams, London Boulevard) about obtaining a piece of land for his family’s caravan. Noah is up for the purchase but wants to know if Colby has approved the move.

What changes things for Chad’s family is the job that Colby sends him and his cohorts on. Life gets complicated for all the travellers.

A good British film that must have been fun to film with Gleeson and Fassbender having a great chemistry together.

Trespass Against Us is available to own on DVD and Blu-ray.