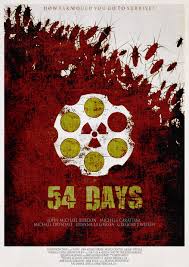 what would you do to stay Alive!

Written and directed by Tim Lea, writer, producer and actor. He has been writing for twelve years and has produced shorts such as Nursery Cry’mes and Easy Money. This film is brought to the big screen via the very difficult route of crowdfunding, which he set about himself. “But if anyone reading this is thinking about crowdfunding – just be aware it takes an inordinate amount of time and is hard work. Would I do it again ? For the right project – in a heartbeat!!”

Tim likes to write about “healthy controversial” thrillers and there are more in the pipeline.

The Film – We find ourselves looking upon a rooftop party, but the greater air within the Australian media shows tension in the world as diplomats are pulled out from Beijing and Moscow. As Washington increases sanctions on Moscow, people are worried about nuclear attacks and we see a salesman showing his shelter building business card, thus setting the scene of nervous tension within the populace, but hey any reason for a party is a good one.

Nick (Michael Drysdale) is a lucky man. He has two women waiting for him at the party, his girlfriend Becky (Yasmin Kassim, Shooting Goldman) and Michelle (Michela Carattini) the wife of his friend Anthony (John Michael Burdon). Michelles’ friend Elizabeth (Dianna La Grassa)  complains about her lectures on radiation sickness as they get together and Michelle has her eye out for her lover as Liz asks if Ant is still being “Ant?” She gets an nod, when Ant brings her a glass of wine she doesn’t look impressed and gets scolded, as it’s a party.

Sam (Matt James) is supplying all the wine for the party as his family have a vineyard and he is Nicks neighbour. When he arrives, his girlfriend is pleased to see him and the relief on Michelles’ face is obvious. Nick is offered a wine but refuses it as he has an allergy to wine and it’s not a pretty sight. Everybody mingles until Nick gets a text alerting him that there has been a nuclear incident at Waragamba Dam and there are great plumes of what look like smoke in the sky, then suddenly, “bam” a flash and a nuke hits downtown Sydney.

Nick knows that Sam’s family have an old bomb-shelter built into the basement of the building, he send Michelle and Liz towards the underground car-park whilst he takes care of Sam. As Michelle and Liz head for the basement with Ant in hot pursuit and Nick closely behind they get to the car-park and Nick heads them to the bunker. He hits the entry code and they all get inside and are just about to close the door as Dirk (Gregory Wilken) manages to squeeze through, but gets his arm cut as Sam’s friends chase after their quarry with vengeance in mind.

With the door sealed, the entrance to this 1960’s bunker is impenetrable. The dials are turned and the water is limited as is the power and food, but the shelves are stocked with wine. 5 Souls have to survive until the nerve toxins and the radiation levels drop to a safe level.

Now we find out about the psyche of those within the tomb and it soon becomes apparent that the rations will only last a certain amount of days and that intense decisions must be made and herein lies the crux of the film. Even though the cast and crew are new to feature films you will not notice

it, in fact you will think they are stars as they perform brilliantly as do the lighting and editing

As tensions build and the power is rationed as much as the tins of spaghetti, we find light entertainment with the other resident of the

bunker “Roachie” . Can secrets be kept and can religious views get in the way of their survival as the wind-up radio stops hearing chatter from the outside world?

This is a film we all want to see, so lets pray that we can get distribution for DVD release here in the UK and wherever else you are reading this. 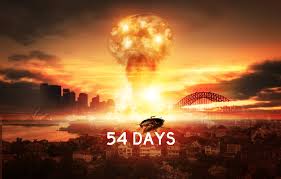 You can however buy or rent this film via Distrify and Vimeo now using the trailer below, just click and follow the on screen instructions.

All the Effort was worth while, well done dudes and dudettes.