4 star conclusion to this interesting if slightly confused story. 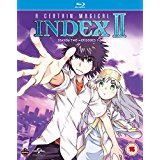 A Certain Magical Index Season 2 is based on a Japanese light novel series written by Kazuma Kamachi (A Certain Scientific Railgun) and is the second part of the story, adapted into two 24 part anime series by J.C Staff (Golden Time, Prison School). It is directed by Hiroshi Nishikiori (Ghost Slayers Amashi).

“When science and magic cross paths, a story is born.” 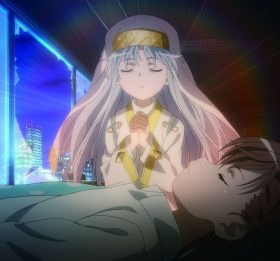 It is set in Academy City, a technologically and scientifically advanced city in Western Tokyo, which consists mostly of highly regarded academic institutions, where students train to release their latent supernatural abilities. This is a world where being able to control electricity, or the flow of materials, or any one of many weird and wonderful talents, is considered quite normal.

The people who command these kind of powers are known as Espers and have their powers from birth. However, most can only gain access to them through the Power Curriculum Programme.

There is another way to gain powers, through mastery of magic, gained from reading Grimoires or using magical artifacts, although this way is clandestine and frowned upon, as the two methods are mutually exclusive. 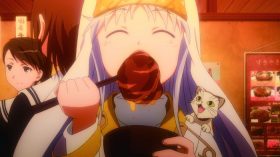 Index Librorum Prohibitorum (Monica Rial – Heavy Object, Tokyo Ghoul), the nun with a photographic memory who has been forced to memorise 103,000 forbidden grimoires, is still living in Academy City. She is under the protection of Toma Kamijo (Micah Solusod – Brothers Conflict, Noragami Aragoto) who is juggling school work and the very needy Index. His unique talent, the Imagine Breaker, allows him to nullify powers using his right hand, making him a fearsome opponent. 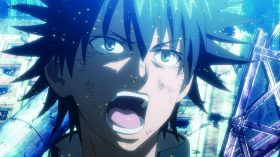 Once again, both Index and the city are under threat, from various warring factions, including the Roman Orthodox Church, the Amakusa Church and the Church of England, while the forces of magic begin to amass against the forces of science. With the help of the other Espers, Mikoto Misaka (Brittney Karbowski – Chaika: The Coffin Princess) and Accelerator (Austin Tindle – No-Rin, Tokyo Ghoul) our protagonists must work together to save Academy City. 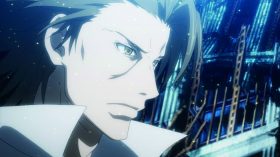 As with the first series, the story is really good, but it’s kept from real brilliance by it’s strangely disjointed presentation. Although every episode begins with the statement that when science and magic cross paths a story is born, the two are kept separate and split into a series of different story arcs. Yet again, there is a lot of emphasis on Mikoto, leaving you wondering at times whether you are in fact watching the spin off, A Certain Scientific Railgun.

If you liked the first one you will love this one and although it’s a bit strange it’s still well worth adding to your collection.

“Pathetic. Look at me after reading just one volume. I’m broken. How could I actually have expected this poor vessel to contain the knowledge of even a single one of the grimoires.”

A Certain Magical Index Season 2 is available to buy now on Dual Format DVD and Blu-ray.