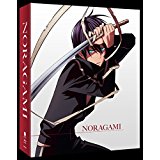 Noragami Aragoto is the sequel to Noragami, brought to us by the anime studio Bones (Fullmetal Alchemist, Space Dandy) and directed by Kotaro Tamura (Wolf Children).

“Yato the baby-sitting God, at your service!”

Yato (Jason Liebrecht – Snow White With the Red Hair) is a God, a God of War to be precise. 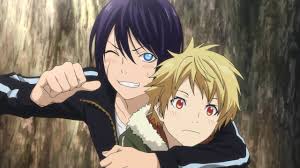 However, in the modern age, work has become scarce and he is now practically destitute, scratching a living by writing his mobile number on walls in public places and charging 5 yen for his services, regardless of the job.

With their differences now resolved, Yato and his Regalia, or weapon, Yukine (Micah Solusod – Heavy Object) are carrying on with their lives. Yukine is being schooled by Hiyori (Bryn Apprill – No-Rin), a schoolgirl who has trouble with her soul slipping from her body and has paid Yato to sort it out for her.

Yato and Yukine are living with fellow God Kofuku (Alexis Tipton – The Future Diary) and her Regalia Daikoku (Ian Sinclair – Attack on Titan: Junior High) at their food shop and everything seems to be going relatively smoothly.

However, an old adversary, Lady Bishamon (Elizabeth Maxwell – Ghost In the Shell: Arise), a fellow War God, hasn’t forgotten her grudge against Yato. Many years previously, he wiped out her entire clan of Regalia, causing her to recruit many more lost souls to fight for her.

She is losing control of them, there is a traitor in the ranks, and when Yukine befriends one of them, Suzuha (Dallas Reid – Tokyo Ghoul Root A) only to lose him to phantoms, a chain of events is set in motion which will rock the very heavens.

Noragami Aragoto is a stunning sequel, which carries on the story brilliantly. We get to see much more of the world in which the story is set, meeting many other Gods and also beginning to learn more about Yato’s mysterious past. Why does he not have a shrine and how does he survive when he is so little known?

It is in many ways darker than the first series, but it still contains plenty of humour. The animation is glorious and you find yourself drawn in very quickly. The characters are well written and you do find yourself genuinely caring about their fates.

A must watch if you have seen the first one and finishes on a pretty big cliff hanger, roll on series three!

“So, all sad and alone again this year? How long are you going to keep this up? For decades, for centuries? I mean surely it’s obvious by now, she forgot you a long time ago.”