3 stars for this reverse harem anime. 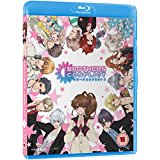 Brothers Conflict is based on the Japanese novel series created by Atsuko Kanase, written by Takeshi Mizuno and illustrated by Udajo. It is adapted to anime by Brain’s Base (Baccano!) and directed by Jun Matsumoto (Night Raid 1931).

“Of course we love each other. We’re family.” 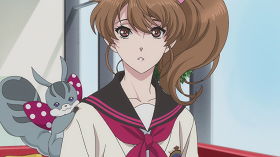 Brothers Conflict tells us the story of Ema Hinata (Colleen Clinkenbeard – One Piece, Space Dandy), a young schoolgirl who is the only child of famous explorer Rintaro Hinata (David Wald – Fairy Tail). With her father always away, she has led a lonely existence, her only companion her pet squirrel Juli (Sonny Strait – Assassination Classroom). All that changes when her father meets the lovely Miwa Asahina (Jamie Marchi – Brynhildr In the Darkness) and the two decide to marry. 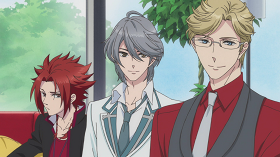 In order to give them some privacy to prepare for the wedding, she decides to move into the Sunrise Residence Complex, owned by Miwa. It is then that she discovers she is about to have 13 step brothers, ranging in age from Wataru (Bryce Papenbrook – Sword Art Online, Attack on Titan) aged 10, to Masaomi (J Michael Tatum – Free! Eternal Summer) a 31 year old doctor.

As you might imagine, things soon begin to get complicated. Despite the fact that technically they should all treat her as their sister, most of the brothers almost immediately fall in love with her and begin to attempt to force their attentions onto her in various ways. 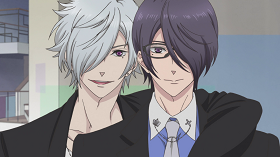 Two of the triplets aged 24, Azusa (Josh Grelle – Yurikuma Arashi) and Tsubaki (Micah Solusod – Noragami) are voice actors and devote all their time to wooing her with their acting skills, while the third triplet Natsume (Kyle Herbert – Naruto: Shippuden) works for a video game company and uses his influence to get her games and win her heart.

There are of course lots of other brothers, each with his own agenda and Ema and her little protector Juli have their work cut out fending them off. 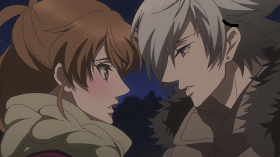 It’s also a little puzzling why all these charming and handsome young men are single and more so why they are all taken with Ema, who has very little going for her, except that she’s available. 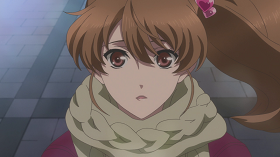 She has the emotional range of a plank and seems quite able to shake off the often predatory attentions of her so called brothers.

What really makes it is the quite astonishing English language vocal cast, the excellent voice acting elevates what might otherwise have been a rather humdrum affair. Excellent viewing for the late teen female audience at which it is clearly aimed.

“At first, I thought of you as a younger sister, but somewhere along the way I realised I had fallen in love with you.”

Brothers Conflict is available to buy now on Blu-ray.