Modern day England and where there are dark places, they are filled with a new horror; humans. A new ‘Freak chip’ is available to those who can afford it, that will give the recipient 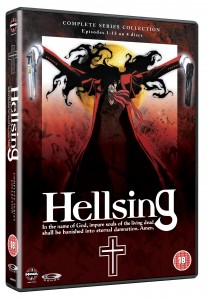 Vampiric abilities and the blood lust to go along with it.

The Hellsing Foundation, a paramilitary  / paranormal operation in league with MI5 but at odds with the Vatican, is the only thing that is there to confront these ghouls and supernatural beasts.

Victoria is a recent turnee coming from a line of police personnel, she has a strong belief in justice and is now Arucard and Integra’s right hand girl going out in the field with their soldiers fighting these new artificial vampires that have all the powers of turning the populace into exsanguinated ghouls all over London from the underground to distant castles. 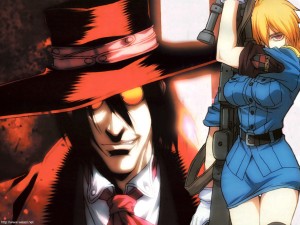 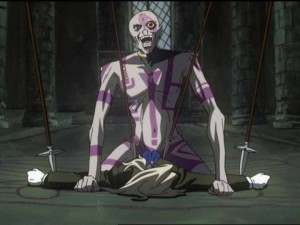 strengths, physical and spiritual, her heightened senses enable her to see what is hidden from her human comrades. Arucard is always just a call out away and brandishing his Hellsing Arms Weapon Industrials Co Ltd 9mm with “Jesus Christ is in heaven” now written down the barrel.

Fighting enemies such as Incognito (Takumi Yamazaki, Macross Plus), ( Isaac C. Singleton Jr, Anger Management), a strange man from the dark continent of ghouls and those that fight for the Vatican, making a deadly rivalry.

They fight the good fight in the dark recesses of England.

Drawn in a graphic novel style with dark colours and moody tones which match the story well, with thirteen, twenty minute episodes, which leave you wanting more.

There is Japanese cover art and concept pictures and Madman propaganda on the four discs and should appeal to the high teens rather than the young as Cert was still to be confirmed when I received them.

Available to buy on DVD  now.