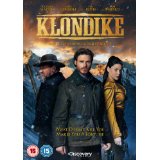 With an up to date stellar cast, this series sees two young graduates who are not happy with their career prospects, but want a life of adventure and excitement. They don’t know in which direction to go, until they meet 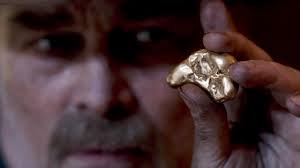 a man in a bar who is buying the ale for the night. This is when they see a gold nugget for the first time and it becomes infectious to the pair of young men, who say that they had heard of a gold rush in the press. However they are told that if it’s in the press the gold rush is all over.

So the Klondike it is then. 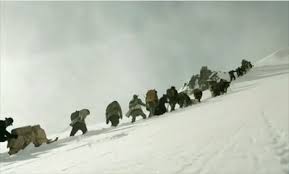 we find best friends Bill, (Richard Madden, Game of Thrones) and Epstein, (Augustus Prew, Kick Ass 2) in the Chilkoot Pass, Southern Alaska. With thoughts of adventure they buy their equipment at the base  camp before the Pass. Bill thinks that Epstein is squandering all their money away, so takes charge of it under Epsteins cautious words that he never gives all his money away.

As they are starting out they are given a warning that if they hear any sound up on the mountain they have 20 seconds to get to safety, which are wise words as  after an arduous climb there is a sudden rumble and the intrepid pair make a run for the nearest rocks as thousands of tons snow descends upon them killing many.

But go on they must and soon the pair are down hill bound on their sledge with laughter in their hearts. 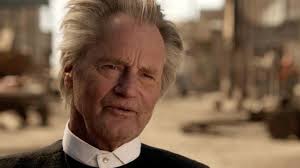 find out, all there is ever underfoot is snow, water or mud, with lows of believing they have lost all their money and the highs of being rescued by Father Judge, (Sam Shepard, Mud) a preacher also heading their way as they continue for Dawson City and the gold that surely awaits them.

The hills around Dawson are literally a mine field, as every square foot has somebody scrambling or digging and sieving the dirt looking for their fortunes. 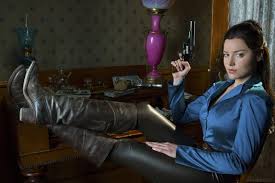 Using their knowledge of the ground, they figure that their claim should be higher up the hill and this is the spot for them, which doesn’t go down too well with some of their neighbours. During this time they come across local businesswoman Belinda Mulrooney, (Abbie Cornish, Limitless). Beautiful and dogged, she aims to be the top dog in Dawson but this irks the ruthless gangster “The Count”, (Tim Roth, Pulp Fiction) who has interests in all things new as he aims to thwart Belinda as they all want a slice of Judge’s pie.

All that goes on in the mining town is observed by the local native people, who become blamed for a murder and the Mountie Superintendent, (Marton Csokas, The Bourne Supremacy) is convinced the locals are to blame, but Bill is sure that the murderer is closer to their claim than that. He searches for the killer

and what he finds is not to his liking. He struggles to get the materials to keep the mine going and has to agree to enter an unwanted unwanted partnership with Soapy, (Ian Hart, Enemy of the State).

This is an Ace series that has you on the edge of your seat through all the episodes and leaves you wanting for more even after the climatic final scenes.