5 stars of hilarious swashbuckling action with the Straw Hats. 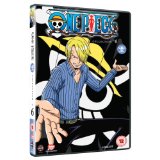 Collection 6 begins immediately after the events of the Alabasta Saga (see One Piece Collection 5), with a short selection of one off episodes, each focusing on a different member of the crew, known as the Post-Alabasta Arc. For me the best one of these involves Sanji teaching a young marine apprentice (and fellow believer in the Great All Blue) to make curry, but hey, we all have our favourites.

After a little light relief, we get straight back to it, and into the next Saga in the series, The Sky Island Saga. 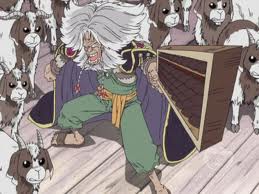 First in the next stage of the adventure is the Goat Island Arc, where our heroes make landfall on a seemingly uninhabited island, only to discover Zenny and his herds of piratey goats.

Next, the Straw Hat Pirates catch a rumour of the possible existence of the Rainbow Mist (the subject of the book found by Nico Robin in Alabasta). Never to be accused of missing an opportunity for an adventure, the Going Merry sets sail for Luluka, the island where the mist is said to exist.

While there, they meet up with the enigmatic old man Henzo, who will stop at nothing to get into the Rainbow Mist and hook up with his childhood friends, The Pumpkin Pirates. There is rumoured to be great treasure hidden within, the only drawback being that once you enter Ape’s Concert you can never leave. 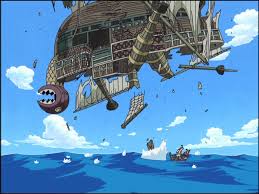 Fans of the Going Merry will be pretty miffed by now, as the poor thing does take quite a battering. As we enter the Jaya Arc, the crew attempt to salvage a ship that falls from the sky, at the same time that the log pose begins to play up, pointing to the sky, which would of course suggest that the next island to visit is located up there. But, that can’t be. Or can it?

After lots of encounters with rival pirates and ships full of monkeys, the Straw Hats finally discover the Knockup Stream, a funnel of water leading to Skypiea, the Sky Island, where the fun really starts! 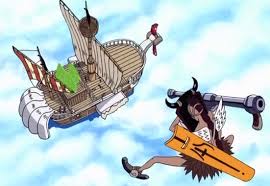 As always, One Piece really delivers the goods. The characters are so well written and the interactions between them are as much a part of the experience as the story-lines themselves, although they too are quite brilliant. You do frequently find yourself wondering where on earth some of the ideas come from, for example the transponder snails have to be one of the best inventions ever.

This will delight One Piece fans and if you haven’t discovered it yet then it’s high time you did!

“The World. What a glorious place. Seek freedom and it will lie stretched before your eyes” 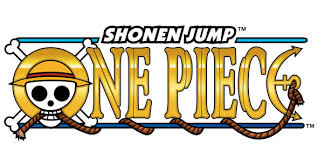 One Piece Collection 6 is available to buy now on DVD.