4 stars for this excellent nostalgia trip to the early nineties. 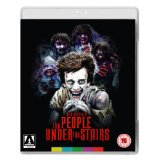 The People Under The Stairs is written and directed by the fabulous Wes Craven (A Nightmare On Elm Street, The Hills Have Eyes) and was first released in 1991.

The film tells us the story of Fool (Brandon Adams – Moonwalker, Champions), a 13 year old boy from the ghetto, facing eviction from his home.

In a display of spectacularly poor judgement, Fool and his sisters friend Leroy (Ving Rhames – Pulp Fiction, Mission: Impossible) decide to try to rob the house of his landlord. It very quickly becomes apparent that his landlord’s home, the Robeson Funeral Home, is not a place you want to be. 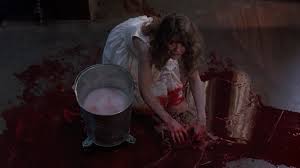 After various dog attacks and electrified doors and barred and padlocked windows, they begin to realise that getting out again may not prove to be nearly as easy as getting in.

Strange noises can be heard all over the place, there are lots of very strange people in the cellar (under the stairs) and some creeping around the house using the cavities behind the walls.

The owners of the house, a Man (Everett McGill – Quest For Fire, Heartbreak Ridge) and a Woman (Wendy Robie – Horror In The Attic, The Glimmerman) clearly have “issues” and the habit the Man has of running around the house wearing a gimp suit and wielding a shot gun is highly amusing. 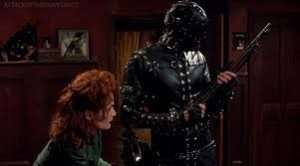 Fool meets up with their daughter Alice (A.J. Langer – Escape From L.A., Meet The Deedles) and her friend Roach (Sean Whalen – Twister, Men In Black) and together they try to come up with an escape plan.

The People Under The Stairs again shows Wes Craven’s knack for astute social commentary, dealing with issues of racism and class distinction as well as the elements of true horror that can always be found in his work. This is not a gore-fest by any means, it’s more intelligent than that. 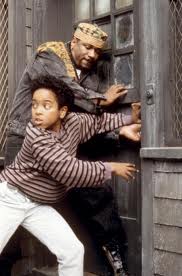 The conversion to Blu-ray is excellent, the picture and the sound quality are both very good.

The packaging for this version has new artwork (see top), features a reversible sleeve and showcases the original poster art, as well as a whole host of new special features, including Fear, Freud and Class Warfare (a 25 minute interview with Wes Craven) and Under The Floorboards (an interview with Jeffrey Reddick, the creator of the Final Destination series).

A most excellent film this and well converted, a great new version, definitely one to add to your retro horror collection.

The People Under The Stairs  is available to buy now on Blu-ray.