I have no idea what this is all about, grudgingly I have given it 0.5 stars. 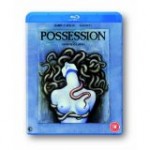 Possession was originally released in 1981 and is now making its apparently long-awaited debut on Blu-ray.

Rather unbelievably, this film was banned in the eighties under the “video nasty” list. If there was a ridiculously weird list it would have fitted much better there.

Possession was directed by Andrzej Zulawski (Fidelity) and tells the story of Anna (Isabelle Adjani – Subway, Toxic Affair) and Mark (Sam Neill – Jurassic Park, The Hunt for Red October), a married couple whose relationship is beginning to unravel. 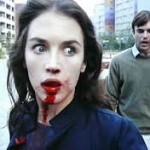 When Mark returns from a business trip he believes that Anna is having an affair. He appoints a private detective to follow her and uncover the truth. He discovers the existence of Heinrich (Heinz Bennent – The Tin Drum, The Last Metro), his wife’s lover, but doesn’t suspect the bizarre tentacled creature with which she also shares a bed.

Their relationship descends into violence, screaming, obsession and almost unthinkable levels of over-acting as the film goes on. The husband and wife become more desperate, Mark to keep his family together and Anna to get away from him. Caught in the middle is their son and various other characters whose part in proceedings are confusing at best, pointless at worst. 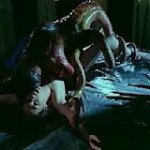 While I normally respect Sam Neill as an actor, this was obviously filmed before he learned that less is more because he takes hamming it up to a whole new level.  In fact everyone in the film seems to think they are in some sort of crazy art-house stage show. Isabelle Adjani actually won a Best Actress award for this, although if I was handing out an award it would have to go to Heinz Bennent, for the Campest Performance Ever In A Horror Film.

The special effects for the creature are pretty good, being done by Carlo Rambaldi (Alien, E.T.) but unfortunately the script, the story and the acting more than make up for it.

These old eighties horror films really don’t stand up to modern standards and although the conversion to Blu-ray is very good it still doesn’t make this worth watching. True, there is plenty of gore, but if that ‘s what you  are after may I suggest an evening at the abattoir? It would certainly be a better use of two hours of your life.