A modern and well made British thriller, 3.5 stars. 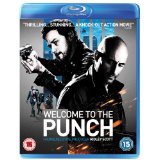 Welcome to the Punch is written and directed by Eran Creevy (Shifty) and is fast paced and energetic, featuring some excellent stunts.

The film introduces us to Max Lewinsky (James McAvoy – Wanted, The Last King of Scotland), a hard nosed London detective who has devoted his career to the capture of Jacob Sternwood (Mark Strong – Tinker Tailor Soldier Spy, Sherlock Holmes). Lewinsky is shot in the knee by Sternwood in the high-octane opening sequence and will do anything it takes to bring him to justice. 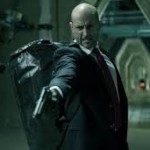 As Sternwood is forced to return from his Icelandic hideaway when his son is arrested and shot while trying to leave the country, Lewinsky is presented with one final opportunity to get his hands on his nemesis and the cat and mouse game begins.

Faced with a deeper conspiracy than either of them expected, the arch-enemies must find a way to work together to survive.

Welcome to the Punch has a great cast and features some brilliant performances, Andrea Riseborough (Oblivion, Brighton Rock) is excellent as Lewinsky’s partner and the film also stars Johnny Harris (Snow White and the Huntsman), David Morris (The Other Boleyn Girl) and Peter Mullan (Train Spotting, War Horse).

Welcome to the Punch is filmed in cool blue tones, amongst the skyscrapers of Canary Wharf and it is visually stunning, clearly reflecting the influence of it’s producer Ridley Scott (Alien, Blade Runner).

It is also very refreshing to see a British action film which doesn’t rely on humour to carry the story-line, although there are moments of comedy they are well integrated into what is essentially a serious film.

And yet in spite of all this, Welcome to the Punch somehow fails to be memorable. The details of the conspiracy are a little hazy and the relationship between Lewinsky and his partner is not explored as fully as I would have liked.

However, it is still a great watch, plenty of action, well filmed shoot outs and some fantastic gun play. Intelligent and well written, this one is definitely worth adding to your collection.

Welcome to the Punch is available to buy on DVD and Blu-ray from 29th July 2013.