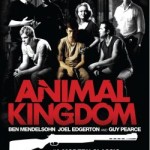 A Brilliant 4 Star film.
Animal Kingdom is a cracking film set in Australia where Joshua ‘J’ Cody (newcomer James Frecheville) a young man coming to terms with the premature death of his mother from an overdose, he also has to deal with the fact that there is no one else to look after him than his Grandmother.
Janine ‘smurf’ Cody, (Jacki…more