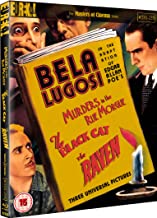 This trio of Pre-Code horror films starring Bela Lugosi (Dracula, The Ape Man) are brought to Blu-ray for the first time in the as part of the Eureka! Masters of Cinema series #233-235. All three have been beautifully restored in High Definition Blu-ray (1080p). They are based on the stories of Edgar Allan Poe with some deviating quite heavily from the original story, but entertaining nevertheless.

“But I was captured by a band of hairless white apes and carried away to a strange land. I’m in the prime of my life and I’m lonely.” 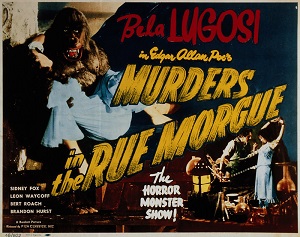 The first film is Murders in the Rue Morgue, directed by Robert Florey (Rogues’ Regiment) and released in 1932. This is the tale of Dr. Mirakle (Lugosi), a side show owner who exhibits a gorilla named Erik. He also experiments on women, attempting to mix their blood with that of a gorilla to produce the perfect mate for Erik.

Pierre Dupin (Leon Ames – Meet Me in St. Louis) and his lovely girlfriend Camille (Sidney Fox – The Mouthpiece) fall foul of this evil madman when they visit his show and Erik takes a liking to Camille.

“Whoever eats anything at a wedding luncheon? They make the food out of papier mache. My salad had been used four or five times this week.” 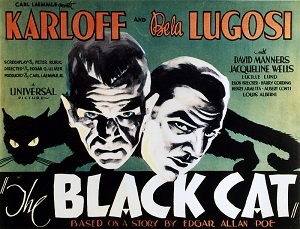 The next film is The Black Cat, directed by Edgar G. Ulmer (The Naked Dawn) and released in 1934. This is the tale of two honeymooners, Peter (David Manners – The Mummy) and his wife Joan (Julie Bishop – Northern Pursuit). They are enjoying a train journey when a double booking means they are forced to share their compartment with a stranger, Dr Vitus Werdergast (Lugosi).

Having offered them a lift, an accident leads to them accompanying him to the house of his old acquaintance Hjalmar Poelzig (Boris Karloff –  Bride of Frankenstein, The Mummy). This house was built on site of a Fort of which he was in charge, where many thousands of men died. Peter and Joan have unwittingly stumbled into an old and intense rivalry.

“Suddenly there came a tapping, as of someone gently rapping. Rapping at my chamber door.” 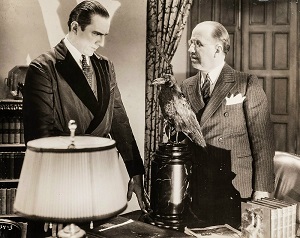 The third and final film is The Raven, directed by Lew Landers (Pacific Line, Sky Giant) and released in 1935. It is the story of Dr. Vollin (Lugosi), a plastic surgeon who is obsessed with the writings of Edgar Allan Poe and owns a collection on homemade torture devices based on his ideas.

Although retired, he is persuaded to save the life of beautiful young dancer Jean Thatcher (Irene Ware – Federal Agent) with whom he falls madly in love. When he is denied by her father Judge Thatcher (Samuel S. Hinds – It’s a Wonderful Life) he loses his mind and horribly disfigures escaped murderer Edmond Bateman (Karloff) to force him to exact a terrible revenge. 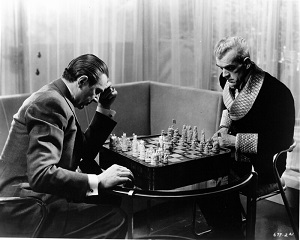 These are three brilliant films, excellent examples of their genre and all benefiting from being made in the brief period in Hollywood before the enforcement of the Motion Picture Production Code’s strict guidelines on moral content. This allowed for some startlingly sadistic and gruesome storytelling that would not be allowed again for a long time.

It’s great to see these gems restored and brought back to life and with a host of special features too, this limited edition (2000 copies only) release is well worth adding to your collection.

“Open then I flung the shutter, when with many a flirt and flutter, in there stepped a stately raven.”