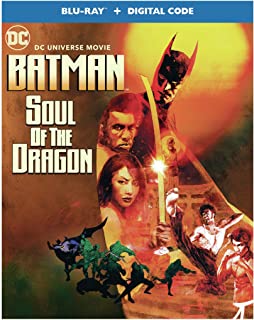 From the DC aficionado’s, writer Jeremy Adams (Lego DC Batman: Family Matters, Lego DC Super Hero Girls: Brain Drain) and director Sam Liu (Batman: Gotham by Gaslight, Batman and Harley Quinn, Batman: The Killing Joke, Batman VS Two-Face) comes a retro style Batman from the days when Bruce Lee was king, the ‘Dark Knight’ was a young man and the Afro’s were high as the flares were wide.

Picture a château in France, a dodgy waiter serves a man and disappears out the back, and we see him next in the penthouse finding the hidden safe and photographing the contents until he sees something very familiar, an object from his past and now somebody else has it, and they aren’t friendly. Four goons come in to take care of him, but with the looks and moves of Bruce Lee, Richard Dragon (Mark Dacascos, John Wick: Chapter 3 – Parabellum, Instinct to Kill) makes light work of them before making his escape.

Scorpion’s Revenge) is reporting to his boss Jeffrey Burr (Josh Keaton, Laws of the Universe Part 1) about the incident in France and the discovery of the ‘Gate’.

A flashback and we see a young Bruce Wayne (David

Giuntoli, 13 Hours, 6 Month Rule) following his chosen path as he reaches the Nanda Parbat, a secret monastery in the Hindu Kush Himalayan region. Once the gate opens he is greeted by O-Sensei (James Ho

Where does that lead? What? That…door it’s set apart from the rest of the buildings. You didn’t mention it. Didn’t I?

Back in Gotham Richard seeks out his old friend Bruce Wayne at his Night club. He knows about Bruce’s vigilante life and when his establishment is attacked by the Axe Gang, who are thugs for Barr and his Kobra Cult of the serpent God Nâga, Richard finds out Bruce’s secret identity. They must protect the gate from the cult at all costs to stop Barr and his ambitions to take over the World. They must get the students back together one last time, but time has passed and people have changed, can The Bat and his associates save the day?

A great nostalgic story with the animation we expect from DC and WB also with cracking sounds of the 70’s thrown in, not to mention a mystical sword, OOH.

A must for the Batman collector.