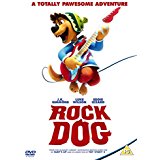 Rock Dog is written and directed by Ash Brannon (Surf’s Up, Toy Story 2) and is based on the graphic novel Tibetan Rock Dog by Zheng Jun, a Chinese singer/rock song writer.

“Go to the city. But if you fail, you come back and never speak of music again.” 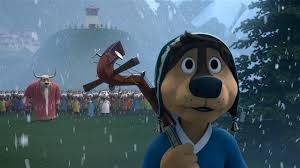 Snow Mountain is the happy and peaceful home of a village of sheep, protected against the evil wolves by their Tibetan Mastiff guardian, Khampa (J.K. Simmons – Spiderman, La La Land). In order to keep the village safe from wolves, Khampa has trained an “army” of sheep in Mastiff’s clothing to give the impression that they are protected.

He is training his son Bodi (Luke Wilson – Idiocracy, Old School) to take his place, however all he wants is to be a musician. The sheep love music too, but Khampa is forced to outlaw it in order to prevent distractions.

When a radio falls from a plane one day, Bodi discovers Rock and Roll and is instantly hooked. He hears an interview with rock legend Angus Scattergood (Eddie Izzard – The Riches, Ocean’s Thirteen) who encourages young musicians to follow their dreams. he decides to head for the city, to Rock and Roll Park to find a band to join.

Here he meets new friends Darma (Mae Whitman – Independance Day, The DUFF) and Germer (Jorge Garcia – Lost, The Healer), who play in a band together with their mean guitarist Trey (Matt Dillon – Crash, Wild Things), who tricks him into attempting to visit Angus Scattergood.

He must make a name for himself while trying to avoid the attentions of wolf leader Linnux (Lewis Black – Imitation Girl, Inside Out) and his bungling henchman Riff (Kenan Thompson – Brother Nature).

Rock Dog is an enjoyable film to watch, with plenty of good music to enjoy and some excellent voice acting. It’s great for kids, with a very colourful albeit slightly basic animation style, but it also has some elements for adults to enjoy (one of the characters is called Fleetwood Yak!).

It is a little strange in places, but with plenty of comedy this is a great film to sit and watch with the whole family.

“Waste management. It’s not very rock and roll is it mate?”

Rock Dog is available to buy now on DVD.