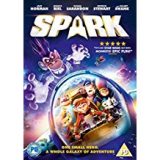 Spark is written and directed by Aaron Woodley (The Entitled, Arctic Justice) and features a host of famous names in its voice cast.

“I hope you’re hungry because you’re about to taste bitter defeat. Time to kick some asteroid!” 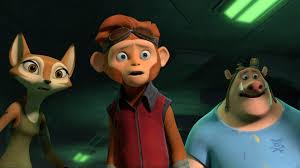 The film tells the story of Spark (Jace Norman – Splitting Adam, Rufus), a thirteen year old monkey. His home planet of Bana was broken up thirteen years previously when the evil Zhong (A. C. Peterson – Shooter, Sucker Punch) took over. He summoned a Kraken to release a Kracken “slick”, which creates wormholes, destroying everything it it’s path and turning half of the planet into shards.

Spark now lives on a garbage shard with the two who rescued him, a warrior fox named Vix (Jessica Biel – Total Recall, The Illusionist) and a pig mechanic named Chuck (Rob deLeeuw – Turbo Kid, Spotlight), as well as a robot, Bananny (Susan Sarandon – Thelma and Louise, Dead Man Walking).  They also share their shard with a small group of roaches, the leader of which is called Floyd. Like any teenager, Spark is restless and longs for adventures, wanting to go out on sorties with Vix and Chunk. 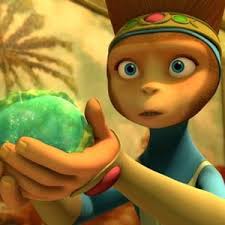 It is a dangerous state of affairs, with the planet ruled by Zhong and his long suffering Queen (Hilary Swank – Million Dollar Baby, Boys Don’t Cry). When it is discovered that Zhong has a Kraken Finder and wishes to summon another Kraken so that he can take over the Universe, it is up to Spark and his friends to try and stop him at all costs, with the help of the former Captain of the Royal Guard (Patrick Stewart – X-Men, Star Trek: The Next Generation). Along the way Spark will find out about his place in the universe.

Spark is a very entertaining film for the whole family. Kids will love how colourful it is and the humour appeals to children and adults alike. The animation is very nice and as you would expect the voice acting is excellent. The insects are also really cute!

This is a good old fashioned rip-roaring space adventure which will have your little ones coming back to it over and over again, well worth putting on your shelf.

Sparks is available to buy now on DVD and Blu-ray