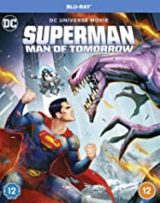 An Alien, a Bounty Hunter and Another Alien.

From art department to director Chris Palmer (Voltron: Legendary Defender (TV Series)) takes on his first animation feature with this latest origin of the Man of Steel story, from the world of DC. Where Metropolis is a futuristic city that reaches into the sky like fantasy ivory towers and Lexcorp is setting the goals of the future.

A young Clark Kent hates watching alien creature features with his friend, as they never portray aliens as friendly and when he is on his own he cannot use the one thing that arrived at the Kent farm.

Jump 20+ years and Clark Kent (Darren Criss, Midway, Girl Most Likely) is an intern at the world-famous Daily Planet where he is the coffee boy and today he and fellow Daily Planet reporter Ron Troupe (Eugene Byrd, A Million Little Pieces) are covering the launch of a space telescope to find life elsewhere in the universe. Lex Luthor (Zachary Quinto, Star Trek, Girl Walks Into a Bar, Star Trek into Darkness) is there himself to see the rocket off.

What Lex didn’t expect was the Grad student Lois Lane (Alexandra Daddario, Texas Chainsaw, San Andreas, Baywatch) coming forward and revealing to all the fraud that Lex had spun to the President to get the funding for the rocket. This is a serious accusation which gets Lex arrested. 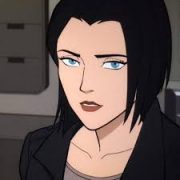 As Clark talks to Star Lab janitor Rudy Jones (Brett Dalton, Agents of S.H.I.E.L.D. (TV Series), Beside Still Waters) the launched rocket goes wrong and starts heading for Metropolis. Suddenly Clark is nowhere to be seen and as if by coincidence the ‘flying-man’ appears in the sky heading for the misguided rocket, and saving the city and sending the rocket to the sun which he finds to invigorate him.

With Lex now doing fifteen years, Clark has his own problems as Lois is on the flying-man’s case in stories like is the flying-man a hero or a menace, and trying to expose him, and she is secretly calling him ‘Superman’.

STAR Labs reveal that an object is hurtling towards Earth and flying-man heads to intercept it, what he wasn’t expecting was an encounter with a Czarnian bounty hunter named Lobo (Ryan Hurst, A Million Little Pieces, Sons of Anarchy (TV Series)), who is searching for the last Kryptonian. He is shocked to find out that on Earth Kryptonians have superpowers to match his size and power. They battle in the sky and through the city until they end up at Star labs and Lobo uses one of his grenades and the purple goo that comes from it infects janitor Rudy Jones. 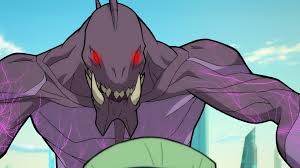 When Rudy comes around in hospital he is not the same man he was a day before, as he grabs the doctors and absorbs their life essence, he has become a parasite. The parasite is hungry for more power to feed its thirst. The man of power is in his way.

Superman Man of Tomorrow is a modern take on how Superman came about, with a Bounty hunter and a Parasite making a mess of Metropolis. Throw in the last Martian (Ike Amadi, Mortal Kombat Legends: Scorpion’s Revenge) and you know you are in for a wild ride. Can Superman save Earth from one of its own? 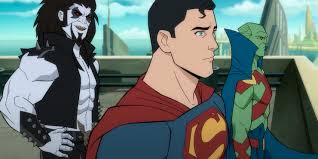 Superman Man of Tomorrow is available on DVD and Blu-ray